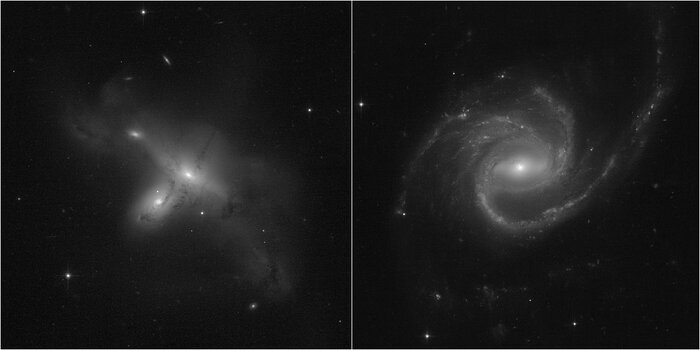 These early snapshots demonstrate the return of the NASA/ESA Hubble Space Telescope to full science operations, following correction of a computer anomaly aboard the spacecraft. Normal science observations were restarted on July 17, at 1:18 pm EDT. Among the early targets are globular star clusters in other galaxies and aurorae on the giant planet Jupiter, in addition to a look at bizarre galaxies.

These two peculiar galaxies are part of a program led by Julianne Dalcanton of the University of Washington in Seattle, to survey oddball galaxies scattered across the sky.

LEFT — ARP-MADORE2115-273 is a rare example of an interacting galaxy pair in the southern hemisphere. These Hubble observations provide Hubble's first high-resolution glimpse at this intriguing system, which is located 297 million light-years away. Astronomers had previously thought this was a "collisional ring" system due to the head-on merger of two galaxies. The new Hubble observations show that the ongoing interaction between the galaxies is far more complex, leaving behind a rich network of stars and dusty gas.

RIGHT — ARP-MADORE0002-503 is a large spiral galaxy with unusual, extended spiral arms, at a distance of 490 million light-years. Its arms extend out to a radius of 163,000 light-years, making it three times more expansive than our Milky Way Galaxy. While most disk galaxies have an even number of spiral arms, this one has three.