Hubble Finds a Planet Forming in an Unconventional Way 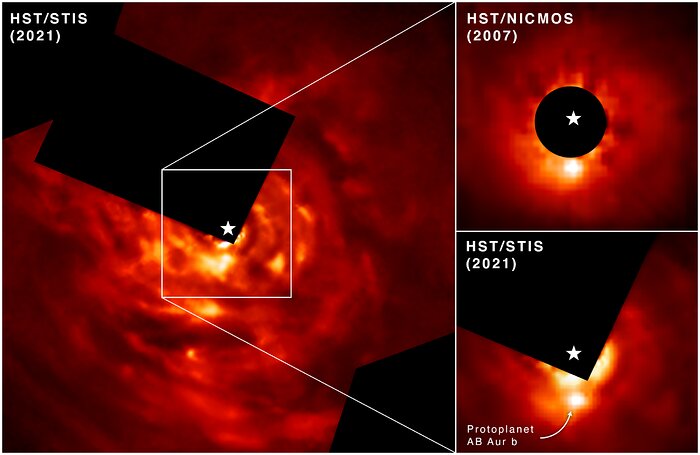 The NASA/ESA Hubble Space Telescope has directly photographed evidence of a Jupiter-like protoplanet forming through what researchers describe as an "intense and violent process." This discovery supports a long-debated theory for how planets like Jupiter form, called "disk instability."

The new world under construction is embedded in a protoplanetary disk of dust and gas with distinct spiral structure swirling around surrounding a young star that’s estimated to be around 2 million years old. That's about the age of our solar system when planet formation was underway. (The solar system's age is currently 4.6 billion years.)

Researchers were able to directly image newly forming exoplanet AB Aurigae b over a 13-year span using the Hubble Space Telescope Imaging Spectrograph (STIS) and its Near Infrared Camera and Multi-Object Spectrograph (NICMOS).

In the top right, Hubble’s NICMOS image captured in 2007 shows AB Aurigae b in a due south position compared to its host star, which is covered by the instrument’s coronagraph. The image captured in 2021 by STIS shows the protoplanet has moved in a counterclockwise motion over time.