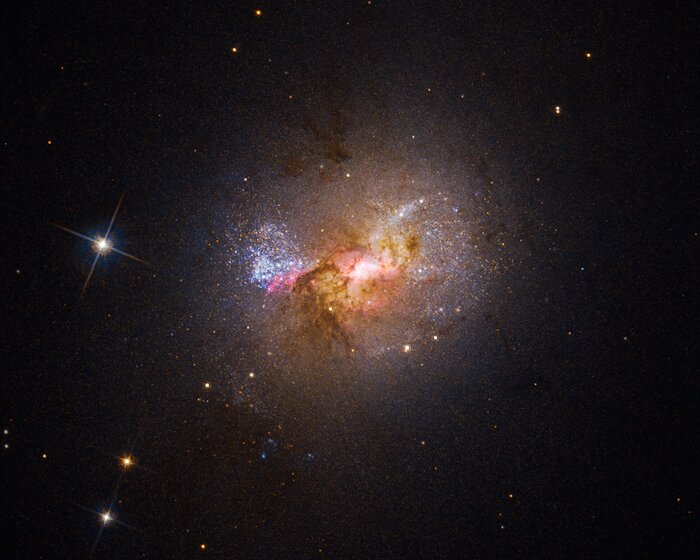 Black holes are often described as the monsters of the universe—tearing apart stars, consuming anything that comes too close, and holding light captive. Detailed evidence from the NASA/ESA Hubble Space Telescope, however, shows a black hole in a new light: fostering, rather than suppressing, star formation. Hubble imaging and spectroscopy of the dwarf starburst galaxy Henize 2-10 clearly show a gas outflow stretching from the black hole to a bright star birth region like an umbilical cord, triggering the already dense cloud into forming clusters of stars. Astronomers have previously debated that a dwarf galaxy could have a black hole analogous to the supermassive black holes in larger galaxies. Further study of dwarf galaxies, which have remained small over cosmic time, may shed light on the question of how the first seeds of supermassive black holes formed and evolved over the history of the universe.

This dwarf starburst galaxy Henize 2-10 sparkles with young stars in this Hubble visible-light image. The bright region at the center, surrounded by pink clouds and dark dust lanes, indicates the location of the galaxy's massive black hole and active stellar nurseries.