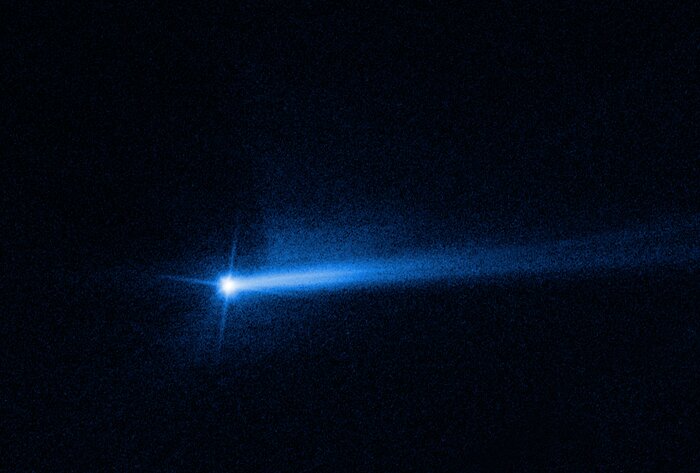 Two tails of dust ejected from the Didymos-Dimorphos asteroid system are seen in new images from the NASA/ESA Hubble Space Telescope, documenting the lingering aftermath of the NASA’s Double Asteroid Redirection Test (DART) impact on 27 September 2022 at 01:14 CEST. Current data show that DART shortened Dimorphos’ original 11 hour and 55 minute orbit around Didymos by about 32 minutes.

Repeated observations from Hubble over the last several weeks have allowed scientists to present a more complete picture of how the system’s debris cloud has evolved over time. The observations show that the ejected material, or “ejecta,” has expanded and faded in brightness as time went on after impact, largely as expected. The twin tail is an unexpected development, although similar behavior is commonly seen in comets and active asteroids. The Hubble observations provide the best-quality image of the double-tail to date.

Following impact, Hubble made 18 observations of the system. Imagery indicates the second tail formed between 2-8 October 2022.

In this image, DART impacted the Didymos-Dimorphos system from the 10 o’clock direction.

The relationship between the comet-like tail and other ejecta features seen at various times in images from Hubble and other telescopes is still unclear, and is something the Investigation Team is currently working to understand. The northern tail is newly developed. In the coming months, scientists will be taking a closer look at the data from Hubble to determine how the second tail developed. There are a number of possible scenarios the team will investigate.

[Image Description: A bright blue spot is at the center of the image, which has a black background. The center bright spot has 3 diffraction spikes extending from its core at the 1 o’clock, 7 o’clock, and 10 o’clock positions. Two tails of ejecta that appear as white streams of material extend out from the center at the 2 o’clock and 3 o’clock positions.]