Globular clusters at the core of NGC 1275 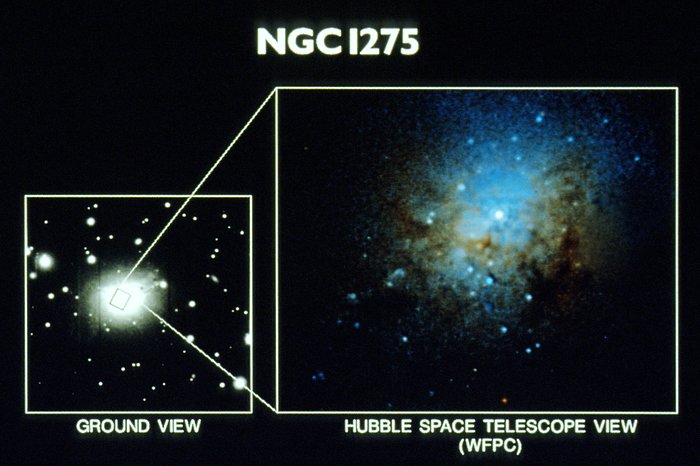 This NASA/ESA Hubble Space Telescope Wide Field/Planetary Camera image of the center of the giant elliptical galaxy NGC 1275, reveals about 50 massive and compact globular clusters. This colour picture is a composite of red and green images. Though this is an approximation of a "true color" view, the colours are intensified beyond what one would expect to see with the naked eye. The clusters appear as blue dots. The white dot is the bright and compact core of the galaxy which is partially encircled by large dark filaments of nebulosity. This image is being presented on Thursday, January 16th at the 179th meeting of the American Astronomical Society in Atlanta, Georgia.

Globular clusters typically contain 100,000 to 10 million stars packed in a region 100 light years in diameter. Most globular clusters are made up of very old stars. Surprisingly, those found in NGC 1275 are young. They may have formed from cataclysmic event in the history of the NGC 1275, such as a merger or collision of two galaxies.