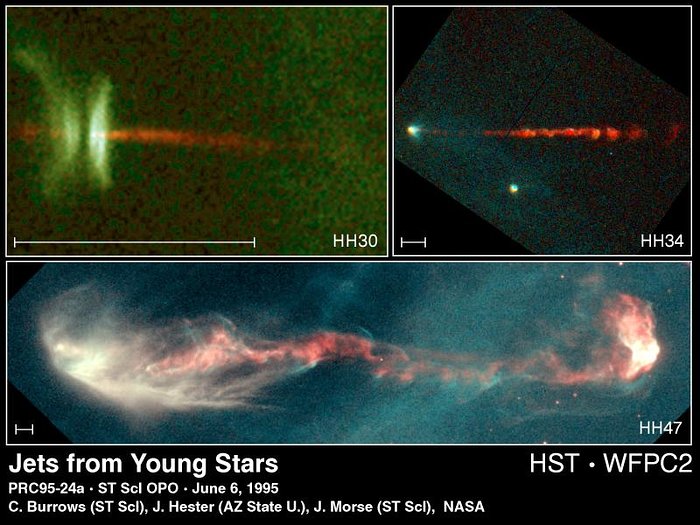 These Hubble Space Telescope views of gaseous jets from three newly forming stars show a new level of detail in the star formation process, and are helping to solve decade-old questions about the secrets of star birth.

This view of a protostellar object called HH-30 reveals an edge-on disk of dust encircling a newly forming star. Light from the forming star illuminates the top and bottom surfaces of the disk, making them visible, while the star itself is hidden behind the densest parts of the disk.

This view of a different and more distant jet in object HH-34 shows a remarkable beaded structure. Once thought to be a hydrodynamic effect (similar to shock diamonds in a jet aircraft exhaust), this structure is actually produced by a machine-gun-like blast of 'bullets' of dense gas ejected from the star at speeds of one-half million miles per hour (about 805 thousand kilometres per hour).

This view of a three trillion mile-long jet called HH-47 reveals a very complicated jet pattern that indicates the star (hidden inside a dust cloud near the left edge of the image) might be wobbling, possibly caused by the gravitational pull of a companion star.