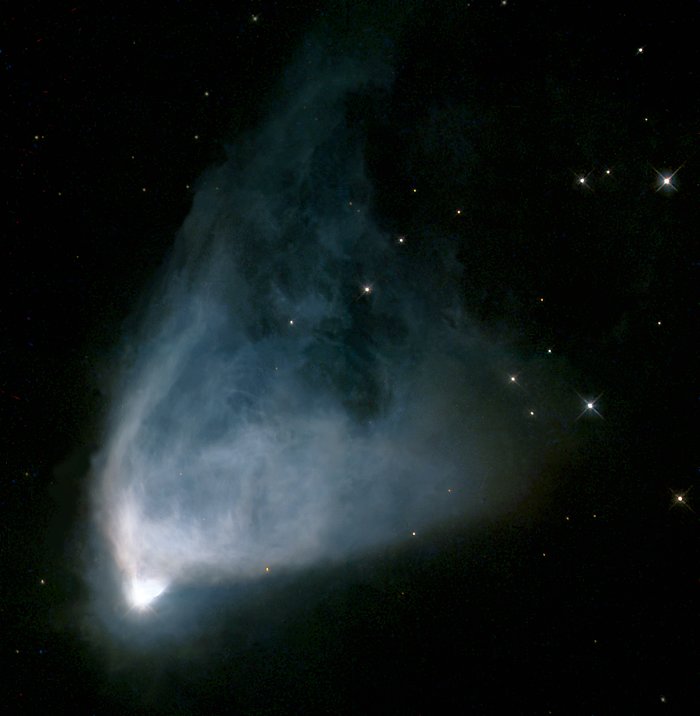 Hubble's variable nebula is named (like the Hubble telescope itself) after the American astronomer Edwin P. Hubble, who carried out some ofthe early studies of this object. It is a fan-shaped cloud of gas and dust which is illuminated by R Monocerotis (R Mon), the bright star at the bottom end of the nebula. Dense condensations of dust near the star cast shadows out into the nebula, and as they move the illumination changes, giving rise to the variations first noted by Hubble. The star itself, lying about 2,500 light-years from Earth, cannot be seen directly, but only through light scattered off of dust particles in the surrounding nebula. R Mon is believed to have a mass of about 10 times that of the Sun, and to have an age of only 300,000 years. There is probably a symmetrical counterpart of the fan-shaped nebula on the southern side of the star, but it is heavily obscured from view by dust lying between this lobe and our line of sight.

The Hubble Heritage team made this image from observations of R Mon acquired by William Sparks (STScI), Sylvia Baggett (STScI) and collaborators.