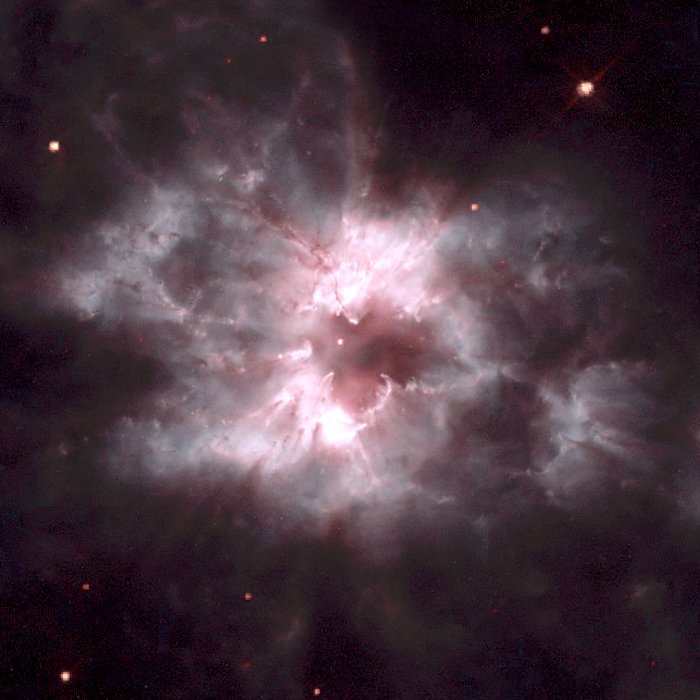 NGC 2440 is another planetary nebula ejected by a dying star, but it has a much more chaotic structure than NGC 2346. The central star of NGC 2440 is one of the hottest known, with a surface temperature near 200,000 degrees Celsius. The complex structure of the surrounding nebula suggests to some astronomers that there have been periodic oppositely directed outflows from the central star, somewhat similar to that in NGC2346, but in the case of NGC 2440 these outflows have been episodic, and in different directions during each episode. The nebula is also rich in clouds of dust, some of which form long, dark streaks pointing away fromthe central star. In addition to the bright nebula, which glows becauseof fluorescence due to ultraviolet radiation from the hot star, NGC 2440 is surrounded by a much larger cloud of cooler gas which is invisible in ordinary light but can be detected with infrared telescopes. NGC 2440 lies about 4,000 light-years from Earth in thedirection of the constellation Puppis.

The Hubble Heritage team made this image from observations of NGC 2440acquired by Howard Bond (STScI) and Robin Ciardullo (Penn State).