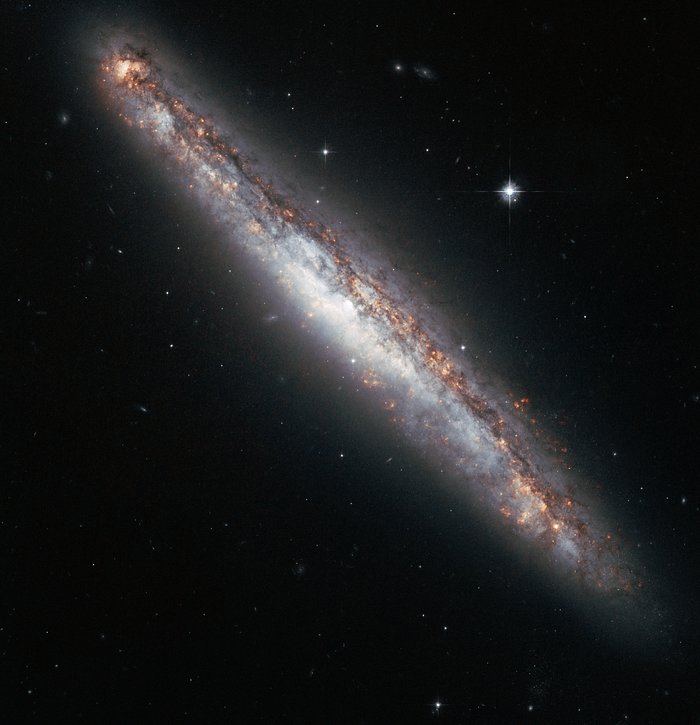 This NASA/ESA Hubble Space Telescope image shows the edge-on profile of the slender spiral galaxy NGC 5775. Although the spiral is tilted away from us, with only a thin slither on view, such a perspective can be advantageous for astronomers because the regions above and below the galaxy’s disc can be seen much more clearly.

For instance, astronomers have previously used the high inclination of this spiral to study the properties of the halo of hot gas that is visible when the galaxy is observed at X-ray wavelengths. The mechanism behind such haloes is unclear, but they are found around spirals that have a high star formation rate, like NGC 5775. Some astronomers think that hot gas from the disc is driven into the halo by supernova explosions, which is then returned to the disc as it cools — like a massive galactic fountain.

Meanwhile, there is further disruption taking place in the disc of NGC 5775, as it is in the early stages of a galactic merger. Astronomers have observed bridges of hydrogen gas connecting this edge-on galaxy with a neighbouring face-on spiral (NGC 5774). But neither galaxy yet features a tidal tail — a disrupted stream of gas and stars that extends into space — which are commonplace in strongly interacting pairs, such as the Antennae Galaxies.

NGC 5775 and 5774 are members of the Virgo Cluster and lie at a distance of about 85 million light-years. This colour picture was created from images taken using the Wide Field Channel of Hubble’s Advanced Camera for Surveys. Images through a red filter (F625W) were coloured blue and images through a filter that isolates the glow from hydrogen gas (F658N) have been coloured red. The exposure times were 2292 s and 6848 s, respectively, and the field of view is 3.2 arcminutes across.