A snapshot of galactic evolution 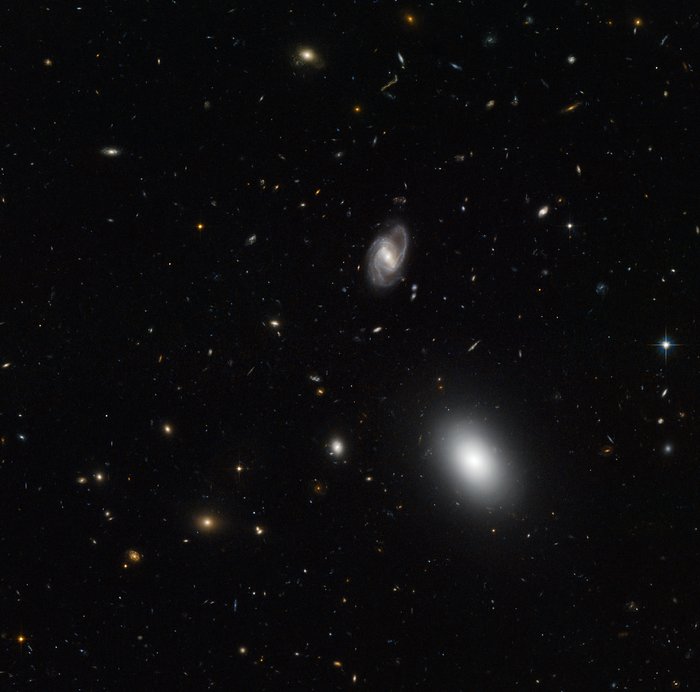 Galaxies come in a variety of shapes and sizes, and these features change as they evolve. Some, like the galaxy in the centre of this NASA/ESA Hubble Space Telescope image, are beautiful spirals with graceful curved arms, while others are fuzzy oval-shaped blobs like the large object showing up near the bottom right of the frame. Others still are rather irregular in shape, such as the orange galaxy at the top of the image, which resembles a tiny wobbling string.

This picture is one of the few hundred exposures taken with Hubble’s Advanced Camera for Surveys to assemble the “Extended Groth Strip”. This strip, named after the Princeton University astronomer Edward Groth, is a composite picture of a rectangular region of the sky in the constellation of Ursa Major. It covers a relatively small area in the sky — equivalent to roughly the width of a finger stretched at arms’ length — but includes at least 50 000 galaxies.

The images that make up the Extended Groth Strip allow astronomers to peer into the last eight billion years of the Universe’s history and to see galaxies at various stages of their evolution. The large elliptical and spiral objects we see in the foreground of this image are fully-formed adult galaxies. But many of the ones in the background, fuzzier and more peculiar in shape, are representative of a time when galaxies were undergoing active formation.

Images like these help astronomers to understand how galaxies change in size and shape as they evolve, from their early formative years — punctuated by violent events such as the growth of the vast black holes at their centres and collisions with other galaxies — into their quieter adult lives.