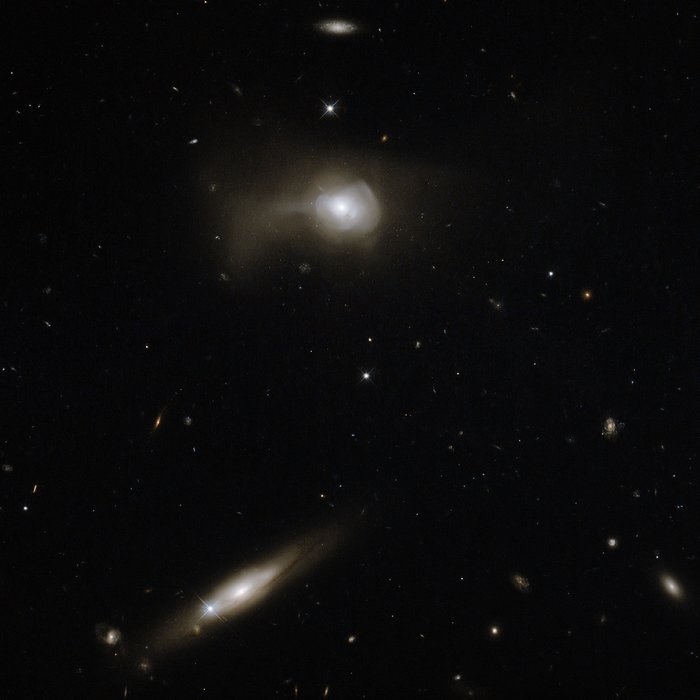 Many of the Universe’s galaxies are like our own, displaying beautiful spiral arms wrapping around a bright nucleus. Examples in this stunning image, taken with the Wide Field Camera 3 on the NASA/ESA Hubble Space Telescope, include the tilted galaxy at the bottom of the frame, shining behind a Milky Way star, and the small spiral at the top centre.

Other galaxies are even odder in shape. Markarian 779, the galaxy at the top of this image, has a distorted appearance because it is likely the product of a recent galactic merger between two spirals. This collision destroyed the spiral arms of the galaxies and scattered much of their gas and dust, transforming them into a single peculiar galaxy with a unique shape.

This galaxy is part of the Markarian catalogue, a database of over 1500 galaxies named after B. E. Markarian, the Armenian astronomer who studied them in the 1960s. He surveyed the sky for bright objects with unusually strong emission in the ultraviolet.

Ultraviolet radiation can come from a range of sources, so the Markarian catalogue is quite diverse. An excess of ultraviolet emissions can be the result of the nucleus of an “active” galaxy, powered by a supermassive black hole at its centre. It can also be due to events of intense star formation, called starbursts, possibly triggered by galactic collisions. Markarian galaxies are, therefore, often the subject of studies aimed at understanding active galaxies, starburst activity, and galaxy interactions and mergers.