A sheep in Wolf-Rayet’s clothing 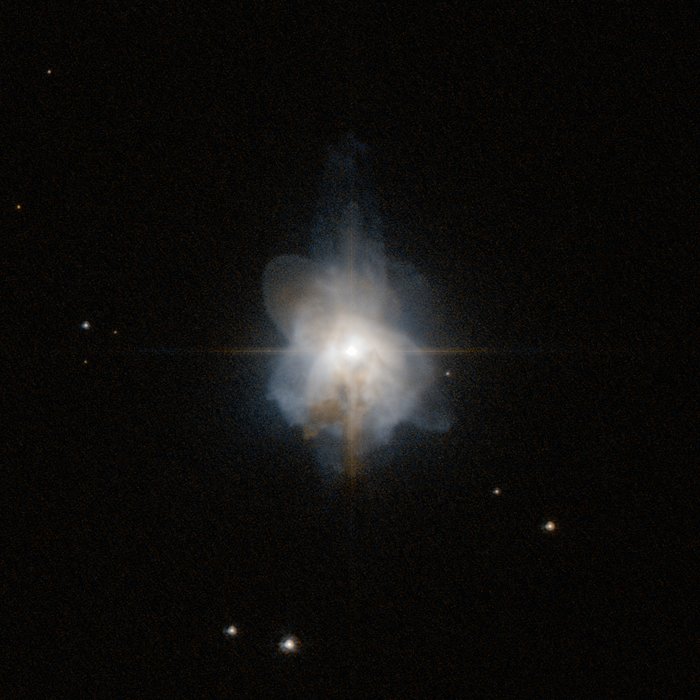 It’s well known that the Universe is changeable: even the stars that appear static and predictable every night are subject to change.

This image from the NASA/ESA Hubble Space Telescope shows planetary nebula Hen 3-1333. Planetary nebulae are nothing to do with planets — they actually represent the death throes of mid-sized stars like the Sun. As they puff out their outer layers, large, irregular globes of glowing gas expand around them, which appeared planet-like through the small telescopes that were used by their first discoverers.

The star at the heart of Hen 3-1333 is thought to have a mass of around 60% that of the Sun, but unlike the Sun, its apparent brightness varies substantially over time. Astronomers believe this variability is caused by a disc of dust which lies almost edge-on when viewed from Earth, which periodically obscures the star.

It is a Wolf–Rayet type star — a late stage in the evolution of Sun-sized stars. These are named after (and share many observational characteristics with) Wolf–Rayet stars, which are much larger. Why the similarity? Both Wolf–Rayet and Wolf–Rayet type stars are hot and bright because their helium cores are exposed: the former because of the strong stellar winds characteristic of these stars; the latter because the outer layers of the stars have been puffed away as the star runs low on fuel.

The exposed helium core, rich with heavier elements, means that the surfaces of these stars are far hotter than the Sun, typically 25 000 to 50 000 degrees Celsius (the Sun has a comparatively chilly surface temperature of just 5500 degrees Celsius).

So while they are dramatically smaller in size, the Wolf–Rayet type stars such as the one at the core of Hen 3-1333 effectively mimic the appearance of their much bigger and more energetic namesakes: they are sheep in Wolf–Rayet clothing.

This visible-light image was taken by the high resolution channel of Hubble’s Advanced Camera for Surveys. The field of view is approximately 26 by 26 arcseconds.