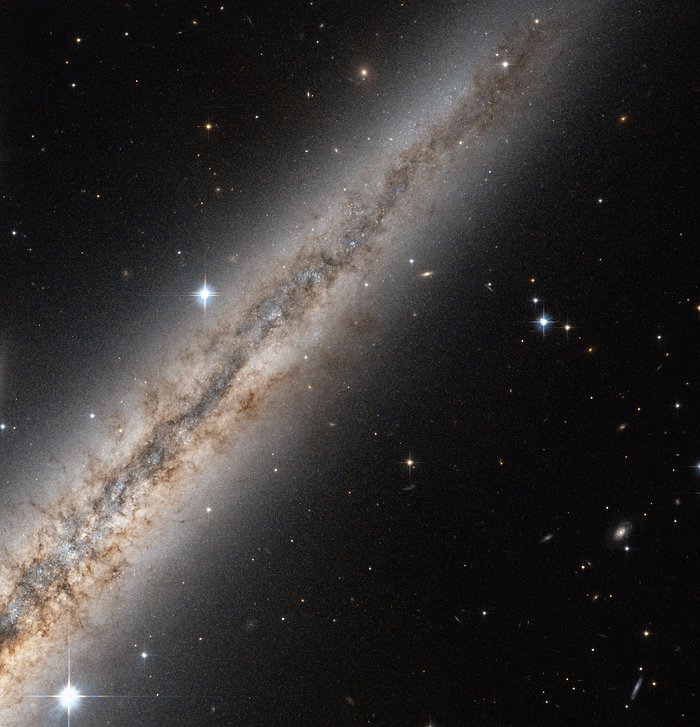 Visible in the constellation of Andromeda, NGC 891 is located approximately 30 million light-years away from Earth. The NASA/ESA Hubble Space Telescope turned its powerful wide field Advanced Camera for Surveys towards this spiral galaxy and took this close-up of its northern half. The galaxy's central bulge is just out of the image on the bottom left.

The galaxy, spanning some 100 000 light-years, is seen exactly edge-on, and reveals its thick plane of dust and interstellar gas. While initially thought to look like our own Milky Way if seen from the side, more detailed surveys revealed the existence of filaments of dust and gas escaping the plane of the galaxy into the halo over hundreds of light-years. They can be clearly seen here against the bright background of the galaxy halo, expanding into space from the disc of the galaxy.

Astronomers believe these filaments to be the result of the ejection of material due to supernovae or intense stellar formation activity. By lighting up when they are born, or exploding when they die, stars cause powerful winds that can blow dust and gas over hundreds of light-years in space.

A few foreground stars from the Milky Way shine brightly in the image, while distant elliptical galaxies can be seen in the lower right of the image.

NGC 891 is part of a small group of galaxies bound together by gravity.

A version of this image was entered into the Hubble’s Hidden Treasures Image Processing Competition by contestant Nick Rose. Hidden Treasures is an initiative to invite astronomy enthusiasts to search the Hubble archive for stunning images that have never been seen by the general public.