A collection of ancient stars 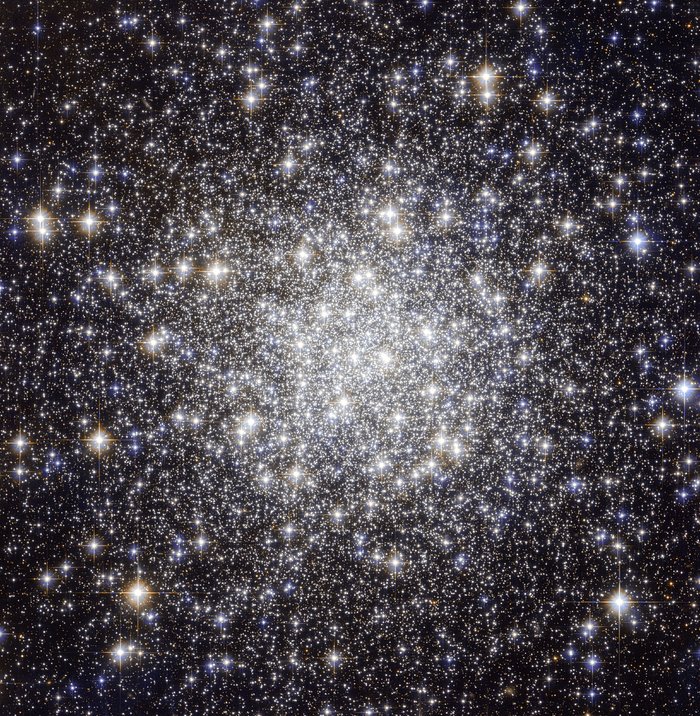 The NASA/ESA Hubble Space Telescope has produced this beautiful image of the globular cluster Messier 56 (also known as M 56 or NGC 6779), which is located about 33 000 light years away from the Earth in the constellation of Lyra (The Lyre). The cluster is composed of a large number of stars, tightly bound to each other by gravity.

However, this was not known when Charles Messier first observed it in January 1779.  He described Messier 56 as “a nebula without stars”, like most globular clusters that he discovered — his telescope was not powerful enough to individually resolve any of the stars visible here, making it look like a fuzzy ball through his telescope’s eyepiece. We clearly see from Hubble’s image how the development of technology over the years has helped our understanding of astronomical objects.

Astronomers typically infer important properties of globular clusters by looking at the light of their constituent stars. But they have to be very careful when they observe objects like Messier 56, which is located close to the Galactic plane. This region is crowded by “field-stars”, in other words, stars in the Milky Way that happen to lie in the same direction but do not belong to the cluster. These objects can contaminate the light, and hence undermine the conclusions reached by astronomers.

A tool often used by scientists for studying stellar clusters is the colour-magnitude (or Hertzsprung-Russell) diagram. This chart compares the brightness and colour of stars – which in turn, tells scientists what the surface temperature of a star is.

By comparing high quality observations taken with the Hubble Space Telescope with results from the standard theory of stellar evolution, astronomers can characterise the properties of a cluster. In the case of Messier 56, this includes its age, which at 13 billion years is approximately three times the age of the Sun. Furthermore, they have also been able to study the chemical composition of Messier 56. The cluster has relatively few elements heavier than hydrogen and helium, typically a sign of stars that were born early in the Universe’s history, before many of the elements in existence today were formed in significant quantities.

Astronomers have found that the majority of clusters with this type of chemical makeup lie along a plane in the Milky Way’s halo. This suggests that such clusters were captured from a satellite galaxy, rather than being the oldest members of the Milky Way's globular cluster system as had been previously thought.

This image consists of visible and near-infrared exposures from Hubble’s Advanced Camera for Surveys. The field of view is approximately 3.3 by 3.3 arcminutes.

A version of this image was entered into the Hubble’s Hidden Treasures Image Processing Competition by contestant Gilles Chapdelaine. Hidden Treasures is an initiative to invite astronomy enthusiasts to search the Hubble archive for stunning images that have never been seen by the general public. The competition has now closed and the results will be published soon.