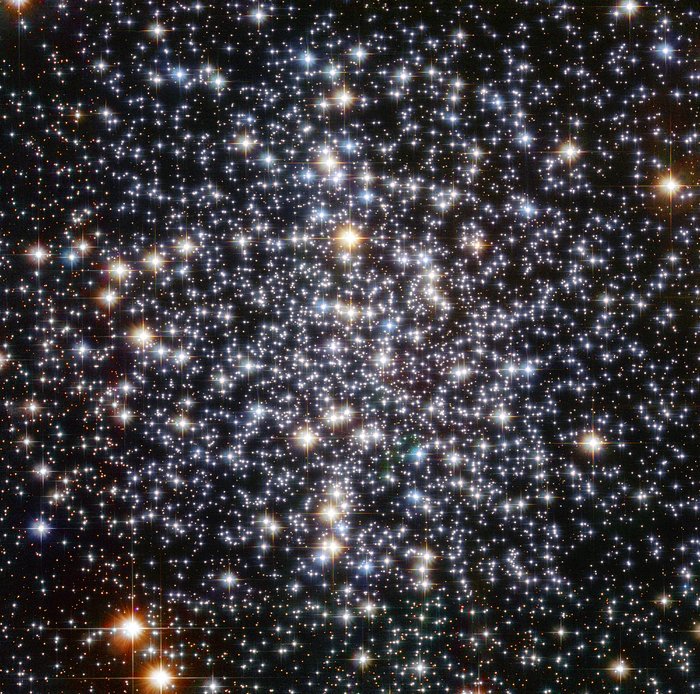 This sparkling picture taken by the NASA/ESA Hubble Space Telescope shows the centre of globular cluster M 4. The power of Hubble has resolved the cluster into a multitude of glowing orbs, each a colossal nuclear furnace.

M 4 is relatively close to us, lying 7200 light-years distant, making it a prime object for study. It contains several tens of thousand stars and is noteworthy in being home to many white dwarfs — the cores of ancient, dying stars whose outer layers have drifted away into space.

In July 2003, Hubble helped make the astounding discovery of a planet called PSR B1620-26 b, 2.5 times the mass of Jupiter, which is located in this cluster. Its age is estimated to be around 13 billion years — almost three times as old as the Solar System! It is also unusual in that it orbits a binary system of a white dwarf and a pulsar (a type of neutron star).

Amateur stargazers may like to track M 4 down in the night sky. Use binoculars or a small telescope to scan the skies near the orange-red star Antares in Scorpius. M 4 is bright for a globular cluster, but it won’t look anything like Hubble’s detailed image: it will appear as a fuzzy ball of light in your eyepiece.

On Wednesday 5 September, the European Southern Observatory (ESO) will publish a wide-field image of M 4, showing the full spheroidal shape of the globular cluster. See it at www.eso.org on Wednesday.