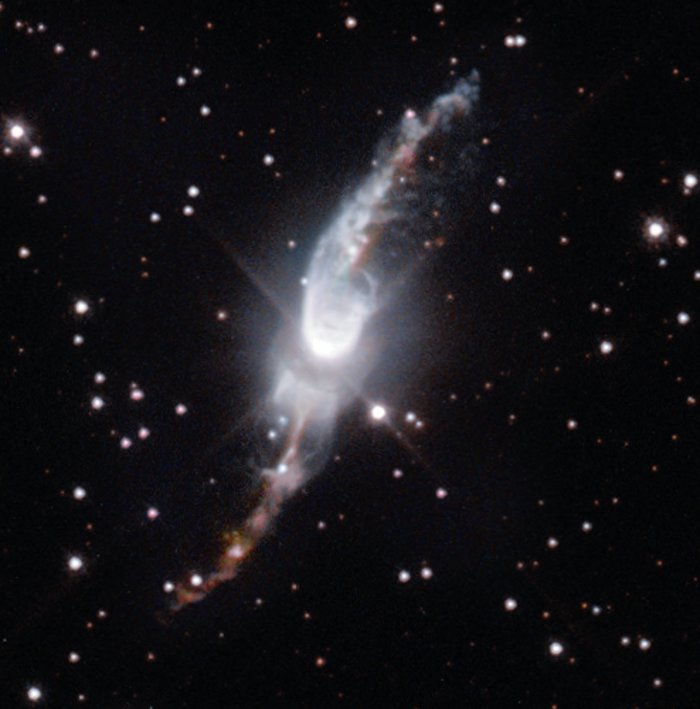 The Universe is filled with mysterious objects. Many of them are as strange as they are beautiful. Among these, planetary nebulae are probably one of the most fascinating objects to behold in the night sky. No other type of object has such a large variety of shapes and structures. The NASA/ESA Hubble Space Telescope provides us this week with a striking image of Hen 3-1475, a planetary nebula in the making.

Planetary nebulae — the name arises because most of these objects resembled a planet when they were first discovered through early telescopes — are expanding, glowing shells of gas coming from Sun-like stars at the ends of their lives. They glow brightly because of the radiation that comes from a hot, compact core, which remains after the outer envelope is ejected, and is powerful enough to make these gossamer shells shine.

Since the central star has not yet blown away its complete shell, the star is not hot enough to ionise the shell of gas and so the nebula does not shine. Rather, we see the expelled gas thanks to light reflected off it. When the star’s envelope is fully ejected, it will begin to glow and become a planetary nebula.

Hen 3-1475 is located in the constellation of Sagittarius around 18 000 light-years away from us. The central star is more than 12 000 times as luminous as our Sun. Its most characteristic feature is a thick torus of dust around the central star and two S-shaped jets that are emerging from the pole regions of the central star. These jets are long outflows of fast-moving gas travelling at hundreds of kilometres per second.

The formation of these bipolar jets has puzzled astronomers for a long time. How can a spherical star form these complex structures? Recent studies suggest that the object’s characteristic shape and the large velocity outflow is created by a central source that ejects streams of gas in opposite directions and precesses once every thousand years. It is like an enormous, slowly rotating garden sprinkler in the middle of the sky. No wonder astronomers also have nicknamed this object the “Garden-sprinkler Nebula”.

This picture was taken with Hubble’s Wide Field Camera 3, which provides significantly higher resolution than previous observations made with the Wide Field and Planetary Camera 2 (heic0308).