An unexpected population of young-looking stars 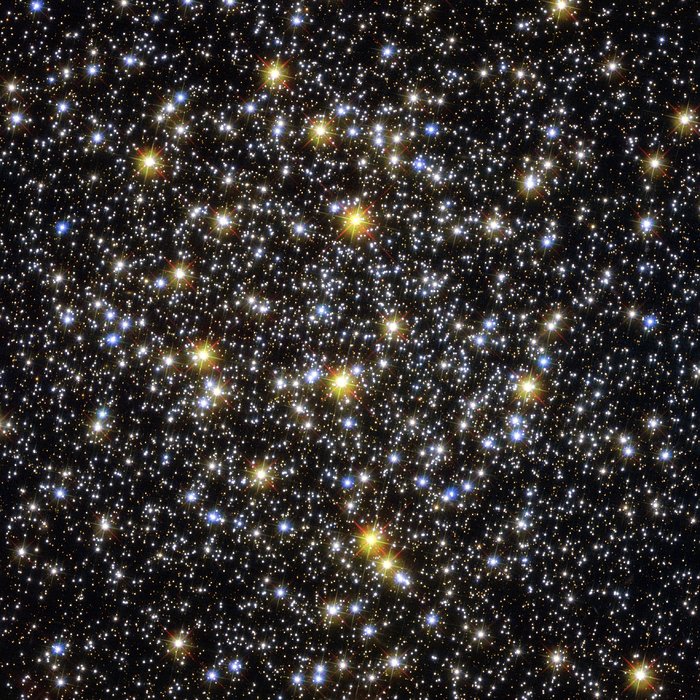 The NASA/ESA Hubble Space Telescope offers an impressive view of the centre of globular cluster NGC 6362. The image of this spherical collection of stars takes a deeper look at the core of the globular cluster, which contains a high concentration of stars with different colours.

Tightly bound by gravity, globular clusters are composed of old stars, which, at around 10 billion years old, are much older than the Sun. These clusters are fairly common, with more than 150 currently known in our galaxy, the Milky Way, and more which have been spotted in other galaxies.

Globular clusters are among the oldest structures in the Universe that are accessible to direct observational investigation, making them living fossils from the early years of the cosmos.

Astronomers infer important properties of globular clusters by looking at the light from their constituent stars. For many years, they were regarded as ideal laboratories for testing the standard stellar evolution theory. Among other things, this theory suggests that most of the stars within a globular cluster should be of a similar age.

Recently, however, high precision measurements performed in numerous globular clusters, primarily with the Hubble Space Telescope, has led some to question this widely accepted theory. In particular, certain stars appear younger and bluer than their companions, and they have been dubbed blue stragglers. NGC 6362 contains many of these stars.

Since they are usually found in the core regions of clusters, where the concentration of stars is large, the most likely explanation for this unexpected population of objects seems to be that they could be either the result of stellar collisions or transfer of material between stars in binary systems. This influx of new material would heat up the star and make it appear younger than its neighbours.

NGC 6362 is located about 25 000 light-years from Earth in the constellation of Ara (The Altar). British astronomer James Dunlop first observed this globular cluster on 30 June 1826.

This image was created combining ultraviolet, visual and infrared images taken with the Wide Field Channel of the Advanced Camera for Surveys and the Wide Field Camera 3. An image image of NGC 6362 taken by the MPG/ESO 2.2-metre telescope will be published by the European Southern Observatory on Wednesday. See it on www.eso.org from 12:00 on 31 October.