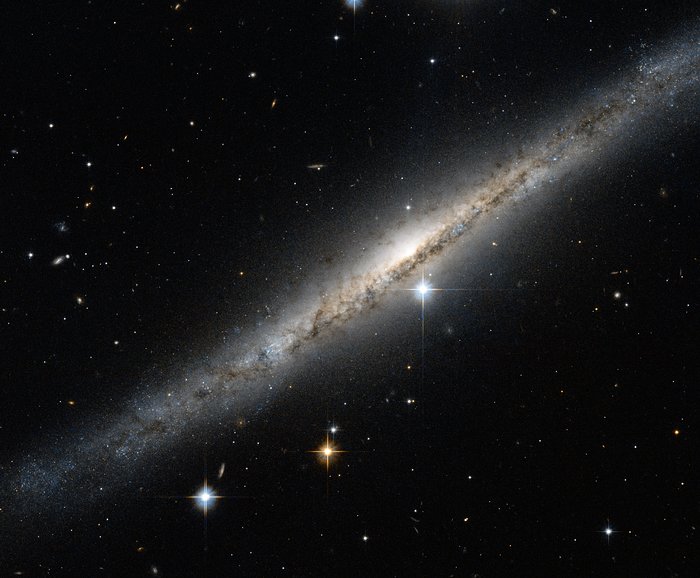 This thin, glittering streak of stars is the spiral galaxy ESO 121-6, which lies in the southern constellation of Pictor (The Painter's Easel). Viewed almost exactly side-on, the intricate structure of the swirling arms is hidden, but the full length of the galaxy can be seen — including the intense glow from the central bulge, a dense region of tightly packed young stars sitting at the centre of the spiral arms.

Tendrils of dark dust can be seen across the frame, partially obscuring the bright centre of the galaxy and continuing out towards the smattering of stars at its edges, where the dust lanes and shapes melt into the inky background. Numerous nearby stars and galaxies are visible as small smudges in the surrounding sky, and the brightest stars are dazzlingly prominent towards the bottom left of the image.

ESO 121-6 is a galaxy with patchy, loosely wound arms and a relatively faint central bulge. It actually belongs to a group of galaxies, a clump of no more than 50 similar structures all loosely bound to one another by gravity. The Milky Way is also a member of a galactic group, known as the Local Group.