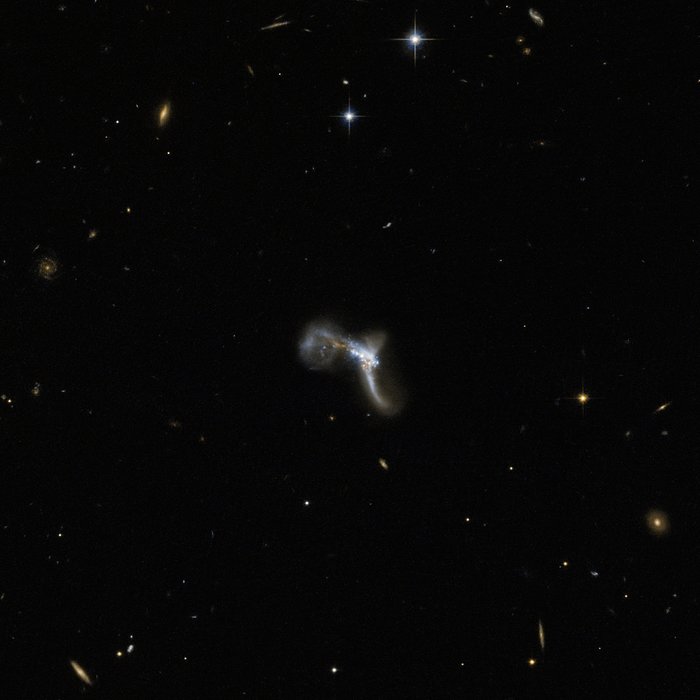 The contorted object captured by Hubble in this picture is IRAS 22491-1808, also known as the South America Galaxy. It is an ultraluminous infrared galaxy (ULIRG) that emits a huge amount of light at infrared wavelengths. The reason for this intense infrared emission lies in an episode of strong star formation activity, which was set off by a collision between two interacting galaxies.

In this image the twisted shape hides a number of features. In the central region, which is very complex and disturbed, scientists have been able to distinguish two nuclei, remains of the two different galaxies that are currently colliding to form a new one. IRAS 22491-1808 is amongst the most luminous of these types of galaxies, and is considered to be mid-way through its merging stage.

The centre of this appealing object also shows several intense star-forming knots which, as seen in the picture, actually outshine the nuclei in optical wavelengths. To pick out the two merging nuclei in IRAS 22491-1808, scientists have had to observe it in infrared wavelengths, where they are more distinct.

Other traces of the galactic collision are the three very noticeable tails in the image — two linear and one circular. The tail extending towards the bottom of the image from the main body exhibits a red clump of star formation at its base.