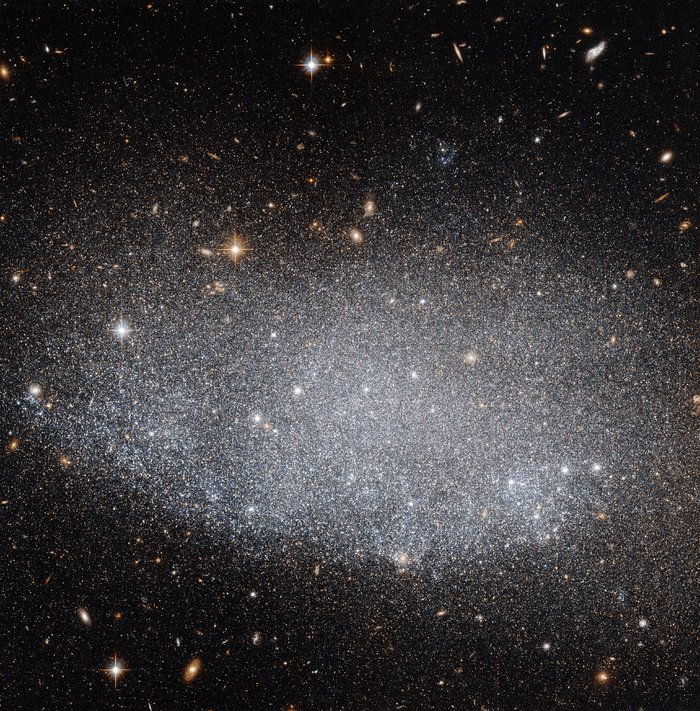 The galaxy UGC 8201, captured here by the NASA/ESA Hubble Space Telescope, is a dwarf irregular galaxy, so called because of its small size and chaotic structure. It lies just under 15 million light-years away from us in the constellation of Draco (the Dragon). As with most dwarf galaxies it is a member of a larger group of galaxies. In this case UCG 8201 is part of the M81 galaxy group; this group is one of the closest neighbours to the Local Group of galaxies, which contains our galaxy, the Milky Way.

UGC 8201 is at an important phase in its evolution. It has recently finished a long period of star formation, which had significant impact on the whole galaxy. This episode lasted for several hundred million years and produced a high number of newborn bright stars. These stars can be seen in this image as the dominating light source within the galaxy. This process also changed the distribution and amount of dust and gas in between the stars in the galaxy.

Such large star formation events need extensive sources of energy to trigger them. However, compared to larger galaxies, dwarf galaxies lack such sources and they do not appear to have enough gas to produce as many new stars as they do. This raises an important unanswered question in galaxy evolution: How do relatively isolated, low-mass systems such as dwarf galaxies sustain star formation for extended periods of time?

Due to its relative proximity to Earth UGC 8201 is an excellent object for research and provides an opportunity to improve our understanding of how dwarf galaxies evolve and grow.