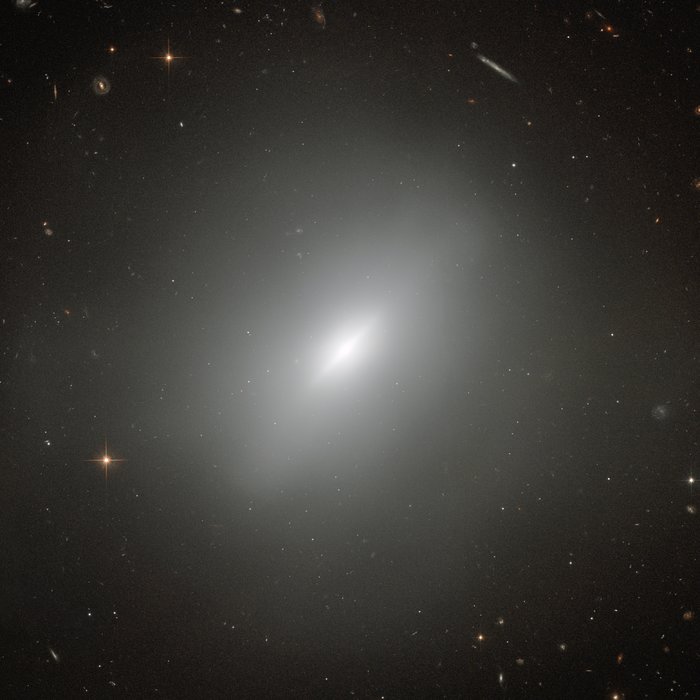 At the centre of this amazing image is the elliptical galaxy NGC 3610. Surrounding the galaxy are a wealth of other galaxies of all shapes. There are spiral galaxies, galaxies with a bar in their central regions, distorted galaxies and elliptical galaxies, all visible in the background. In fact, almost every bright dot in this image is a galaxy — the few foreground stars are clearly distinguishable due to the diffraction spikes that overlay their images.

NGC 3610 is of course the most prominent object in this image — and a very interesting one at that! Discovered in 1793 by William Herschel, it was later found that this elliptical galaxy contains a disc. This is very unusual, as discs are one of the main distinguishing features of a spiral galaxy. And NGC 3610 even hosts a memarkable bright disc.

The reason for the peculiar shape of NGC 3610 stems from its formation history. When galaxies form, they usually resemble our galaxy, the Milky Way, with flat discs and spiral arms where star formation rates are high and which are therefore very bright. An elliptical galaxy is a much more disordered object which results from the merging of two or more disc galaxies. During these violent mergers most of the internal structure of the original galaxies is destroyed. The fact that NGC 3610 still shows some structure in the form of a bright disc implies that it formed only a short time ago. The galaxy’s age has been put at around four billion years and it is an important object for studying the early stages of evolution in elliptical galaxies.