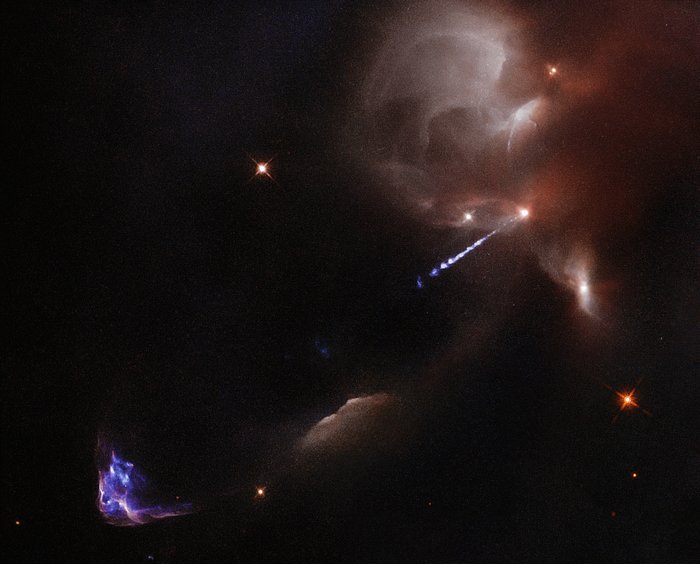 The artistic outburst of an extremely young star, in the earliest phase of formation, is captured in this spectacular image from the NASA/ESA Hubble Space Telescope. The colourful wisps, found in the lower left of the image, are painted onto the sky by a young star cocooned in the partially illuminated cloud of obscuring dust seen to the upper right.

Pictured punching through the enshrouding dust is an extremely hot, blue jet of gas released by the young star. As this jet speeds through space, it collides with cooler surrounding material. The result is the colourful object to the lower left, produced as the cooler material is heated by the jet (opo9524a, potw1307a).

This wispy object is known as HH34 and it is an example of a Herbig–Haro (HH) object. It resides approximately 1400 light-years away near the Orion Nebula, a large star formation region within the Milky Way. HH objects exist for a cosmically brief time — typically thousands of years — with changes seen in observations taken only a few years apart (heic1113).

Although the jet extends the entire length between the infant star and HH34, only a fraction of it appears visible. This part of the jet possesses an intricate structure of knots and ripples, thought to be caused by the different outbursts catching up and ramming into each other over time.