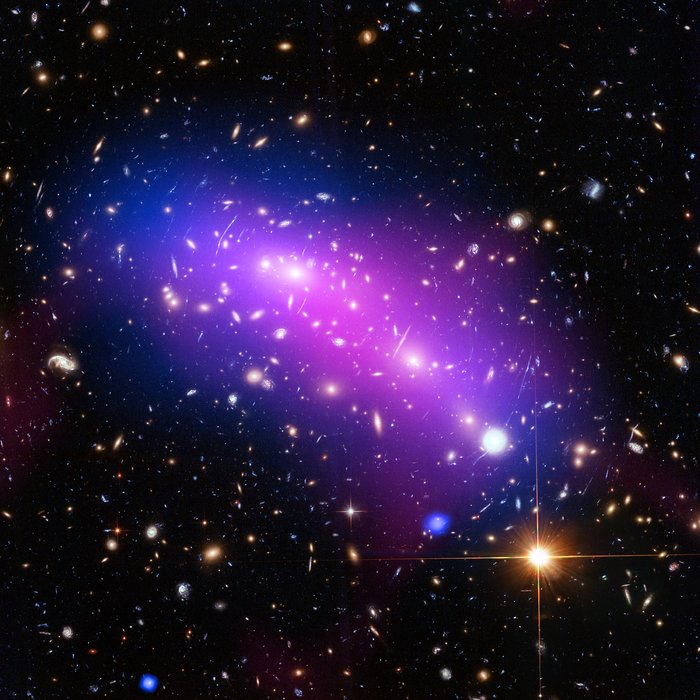 At first glance, this cosmic kaleidoscope of purple, blue and pink offers a strikingly beautiful — and serene — snapshot of the cosmos. However, this multi-coloured haze actually marks the site of two colliding galaxy clusters, forming a single object known as MACS J0416.1-2403 (or MACS J0416 for short).

MACS J0416 is located about 4.3 billion light-years from Earth, in the constellation of Eridanus. This new image of the cluster combines data from three different telescopes: the NASA/ESA Hubble Space Telescope (showing the galaxies and stars), the NASA Chandra X-ray Observatory (diffuse emission in blue), and the NRAO Jansky Very Large Array (diffuse emission in pink). Each telescope shows a different element of the cluster, allowing astronomers to study MACS J0416 in detail.

As with all galaxy clusters, MACS J0416 contains a significant amount of dark matter, which leaves a detectable imprint in visible light by distorting the images of background galaxies. In this image, this dark matter appears to align well with the blue-hued hot gas, suggesting that the two clusters have not yet collided; if the clusters had already smashed into one another, the dark matter and gas would have separated. MACS J0416 also contains other features — such as a compact core of hot gas — that would likely have been disrupted had a collision already occurred.

Together with five other galaxy clusters, MACS J0416 is playing a leading role in the Hubble Frontier Fields programme, for which this data was obtained. Owing to its huge mass, the cluster is in fact bending the light of background objects, acting as a magnifying lens. Astronomers can use this phenomenon to find galaxies that existed only hundreds of million years after the big bang.

For more information on both Frontier Fields and the phenomenon of gravitational lensing, see Hubblecast 90: The final frontier.