Elegance conceals an eventful past 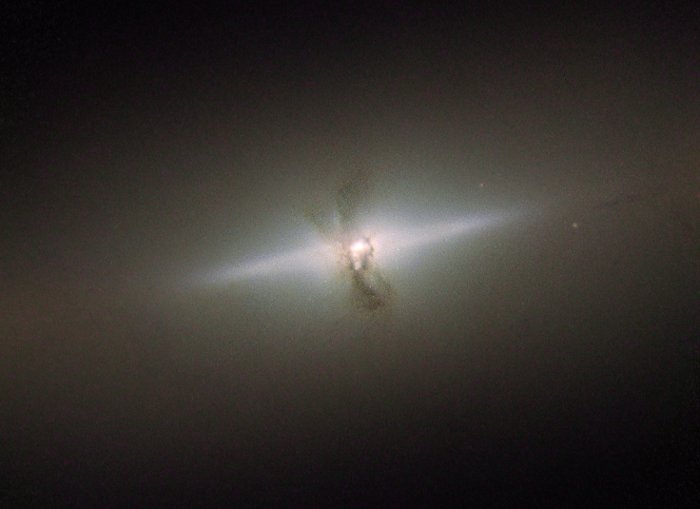 The elegant simplicity of NGC 4111, seen here in this image from the NASA/ESA Hubble Space Telescope, hides a more violent history than you might think. NGC 4111 is a lenticular, or lens-shaped, galaxy, lying about 50 million light-years from us in the constellation of Canes Venatici (The Hunting Dogs).

Lenticular galaxies are an intermediate type of galaxy between an elliptical and a spiral. They host aged stars like ellipticals and have a disk like a spiral. However, that’s where the similarities end: they differ from ellipticals because they have a bulge and a thin disk, but are different from spirals because lenticular discs contain very little gas and dust, and do not feature the many-armed structure that is characteristic of spiral galaxies. In this image we see the disc of NGC 4111 edge-on, so it appears as a thin sliver of light on the sky.

At first sight, NGC 4111 looks like a fairly uneventful galaxy, but there are unusual features that suggest it is not such a peaceful place. Running through its centre, at right angles to the thin disc, is a series of filaments, silhouetted against the bright core of the galaxy. These are made of dust, and astronomers think they are associated with a ring of material encircling the galaxy’s core. Since it is not aligned with the galaxy’s main disc, it is possible that this polar ring of gas and dust is actually the remains of a smaller galaxy that was swallowed up by NGC 4111 long ago.