A glittering sphere of stars 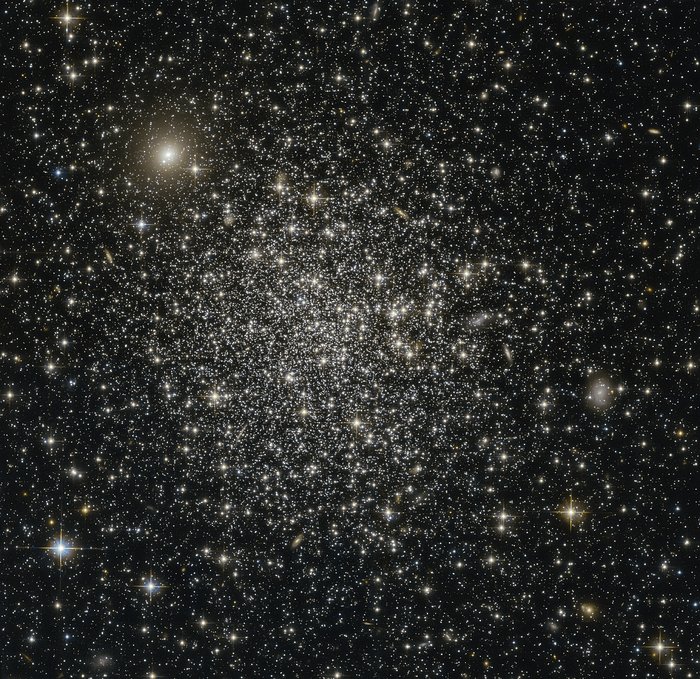 This NASA/ESA Hubble Space Telescope image reveals the simple beauty of NGC 339, a massive intermediate age star cluster in the southern constellation of Tucana (The Toucan).

NGC 339 is part of the Small Magellanic Cloud (SMC), a dwarf galaxy that lies around 200 000 light-years away from us. Along with our own galaxy, the Milky Way, the SMC is one of a collection of neighbouring galaxies known as the Local Group.

By measuring the brightnesses and colours of the stars of NGC 339, astronomers were able to estimate the overall age of the cluster — a method that places NGC 339 at around 6.5 billion years old. This makes it only half the age of the more common globular clusters. The relationship between massive intermediate age star clusters, such as NGC 339,  and the true globular clusters are not fully understood yet. So far none of these type of clusters has been found in the Milky Way.

In this very detailed image, it is also possible to see a number of galaxies. They appear as fuzzy, extended blobs, contrasting with the sharp stars that make up NGC 339. Most obvious here are two elliptical galaxies, one towards the top left of the image and another in the centre right. These galaxies are not associated with NGC 339 but lie far in the background, across the vast expanse of the cosmos.