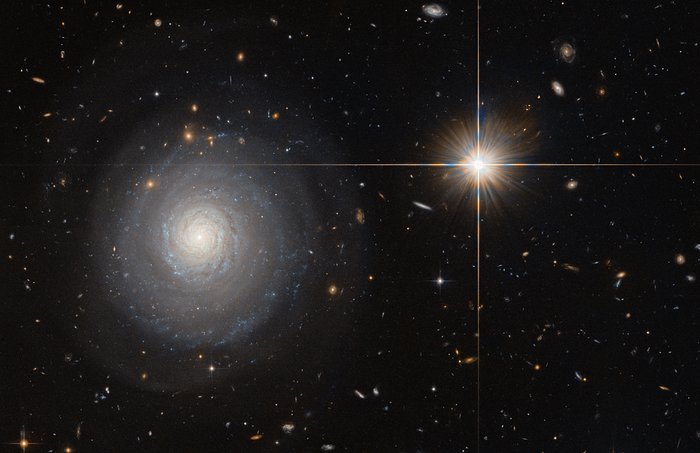 This image was taken by the NASA/ESA Hubble Space Telescope’s Advanced Camera for Surveys (ACS), and shows a starburst galaxy named MCG+07-33-027. This galaxy lies some 300 million light-years away from us, and is currently experiencing an extraordinarily high rate of star formation — a starburst. Normal galaxies produce only a couple of new stars per year, but starburst galaxies can produce a hundred times more than that! As MCG+07-33-027 is seen face-on, the galaxy’s spiral arms and the bright star-forming regions within them are clearly visible and easy for astronomers to study.

In order to form newborn stars, the parent galaxy has to hold a large reservoir of gas, which is slowly depleted to spawn stars over time. For galaxies in a state of starburst, this intense period of star formation has to be triggered somehow — often this happens due to a collision with another galaxy. MCG+07-33-027, however, is special; while many galaxies are located within a large cluster of galaxies, MCG+07-33-027 is a field galaxy, which means it is rather isolated. Thus, the triggering of the starburst was most likely not due to a collision with a neighbouring or passing galaxy and astronomers are still speculating about the cause.