A galaxy fit to burst 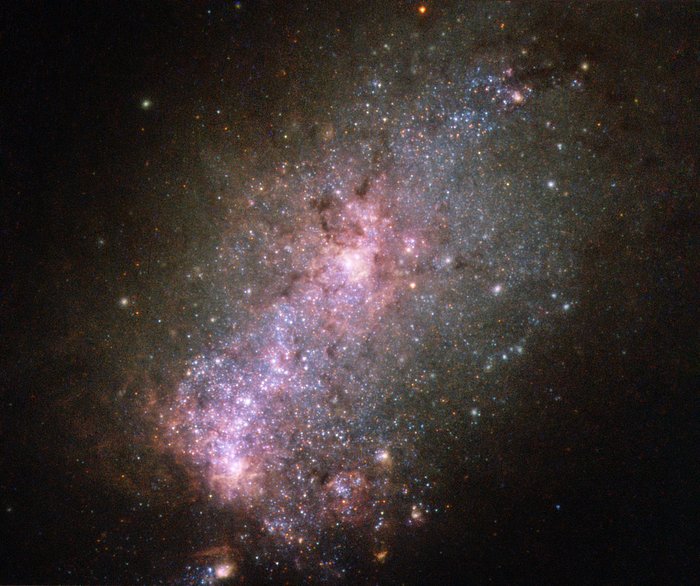 This NASA/ESA Hubble Space Telescope image reveals the vibrant core of the galaxy NGC 3125. Discovered by John Herschel in 1835, NGC 3125 is a great example of a starburst galaxy — a galaxy in which unusually high numbers of new stars are forming, springing to life within intensely hot clouds of gas.

Located approximately 50 million light-years away in the constellation of Antlia (The Air Pump), NGC 3125 is similar to, but unfathomably brighter and more energetic than, one of the Magellanic Clouds. Spanning 15 000 light-years, the galaxy displays massive and violent bursts of star formation, as shown by the hot, young, and blue stars scattered throughout the galaxy’s rose-tinted core. Some of these clumps of stars are notable — one of the most extreme Wolf–Rayet star clusters in the local Universe, NGC 3125-A1, resides within NGC 3125.

Despite their appearance, the fuzzy white blobs dotted around the edge of this galaxy are not stars, but globular clusters. Found within a galaxy’s halo, globular clusters are ancient collections of hundreds of thousands of stars. They orbit around galactic centres like satellites — the Milky Way, for example, hosts over 150 of them.