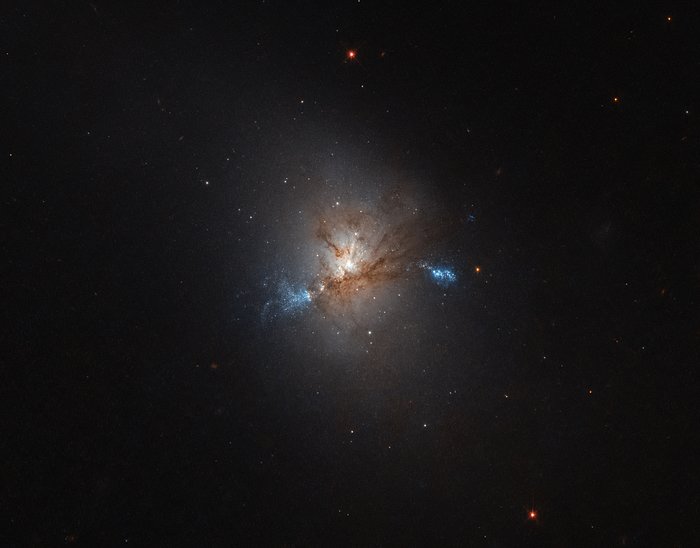 NGC 1222, seen in this image taken with the Wide Field Camera 3 on board the NASA/ESA Hubble Space Telescope (HST), is a galaxy with a rather eventful story to tell. NGC 1222 has been described as a peculiar example of a type of galaxy known as a lenticular galaxy. Typically, this kind of galaxy would present a rather smooth appearance on the sky and would consist mostly of old, reddish stars. A bit dull, perhaps.

But NGC 1222 is certainly not a typical member of its class — and it’s anything but dull. Observations show the characteristic features of very recent star formation on a huge scale — an event known as a starburst. The reason for all this violent activity is caused by the fact that NGC 1222 is not alone. It actually contains three compact regions, each of which appears to be the central nucleus of a galaxy. Astronomers think that NGC 1222 is in the process of swallowing up two much smaller dwarf galaxies that strayed too close to it. It is likely that the encounter was the trigger for the starburst in NGC 1222, bringing in fresh supplies of gas that are now fuelling the burst of star formation.

Although its peculiarities were first seen in photographic images, these were not able to reveal the level of fine detail that can be recovered by Hubble. The image taken by Hubble allows us to see an astonishing amount of structure in this galaxy, emphasising its colourful history. Against the smooth background of old stars that was the original lenticular galaxy, we can clearly see dark filaments of dust and bright filaments of gas, both associated with the powerful star formation process. Credit: