A slice of Sagittarius 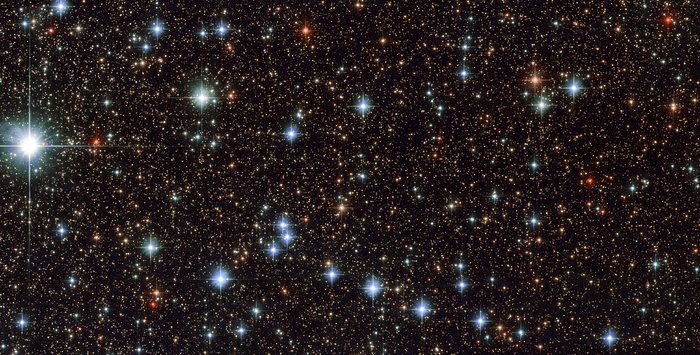 This stunning image, captured by the NASA/ESA Hubble Space Telescope’s Advanced Camera for Surveys (ACS), shows part of the sky in the constellation of Sagittarius (The Archer). The region is rendered in exquisite detail — deep red and bright blue stars are scattered across the frame, set against a background of thousands of more distant stars and galaxies. Two features are particularly striking: the colours of the stars, and the dramatic crosses that burst from the centres of the brightest bodies.

While some of the colours in this frame have been enhanced and tweaked during the process of creating the image from the observational data, different stars do indeed glow in different colours. Stars differ in colour according to their surface temperature: very hot stars are blue or white, while cooler stars are redder. They may be cooler because they are smaller, or because they are very old and have entered the red giant phase, when an old star expands and cools dramatically as its core collapses.

The crosses are nothing to do with the stars themselves, and, because Hubble orbits above Earth’s atmosphere, nor are they due to any kind of atmospheric disturbance. They are actually known as diffraction spikes, and are caused by the structure of the telescope itself. Like all big modern telescopes, Hubble uses mirrors to capture light and form images. Its secondary mirror is supported by struts, called telescope spiders, arranged in a cross formation, and they diffract the incoming light. Diffraction is the slight bending of light as it passes near the edge of an object. Every cross in this image is due to a single set of struts within Hubble itself! Whilst the spikes are technically an inaccuracy, many astrophotographers choose to emphasise and celebrate them as a beautiful feature of their images. Credit: