Sidekick or star of the show? 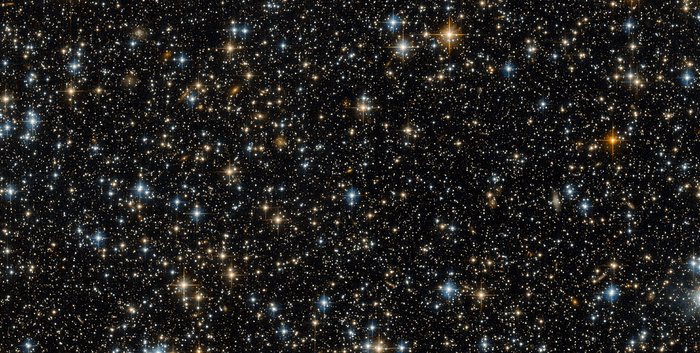 This image was captured by the NASA/ESA Hubble Space Telescope’s Advanced Camera for Surveys (ACS), a highly efficient wide-field camera covering the optical and near-infrared parts of the spectrum. While this lovely image contains hundreds of distant stars and galaxies, one vital thing is missing — the object Hubble was actually studying at the time!

This is not because the target has disappeared. The ACS actually uses two detectors: the first captures the object being studied — in this case an open star cluster known as NGC 299 — while the other detector images the patch of space just ‘beneath’ it. This is what can be seen here.

Technically, this picture is merely a sidekick of the actual object of interest — but space is bursting with activity, and this field of bright celestial bodies offers plenty of interest on its own. It may initially seem to show just stars, but a closer look reveals many of these tiny objects to be galaxies. The spiral galaxies have arms curving out from a bright centre. The fuzzier, less clearly shaped galaxies might be ellipticals. Some of these galaxies contain millions and millions of stars, but are so distant that all of their starry residents are contained within just a small pinprick of light that appears to be the  same size as a single star!

The bright blue dots are very hot stars, sometimes distorted into crosses by the struts supporting Hubble’s secondary mirror. The redder dots are cooler stars, possibly in the red giant phase when a dying star cools and expands.