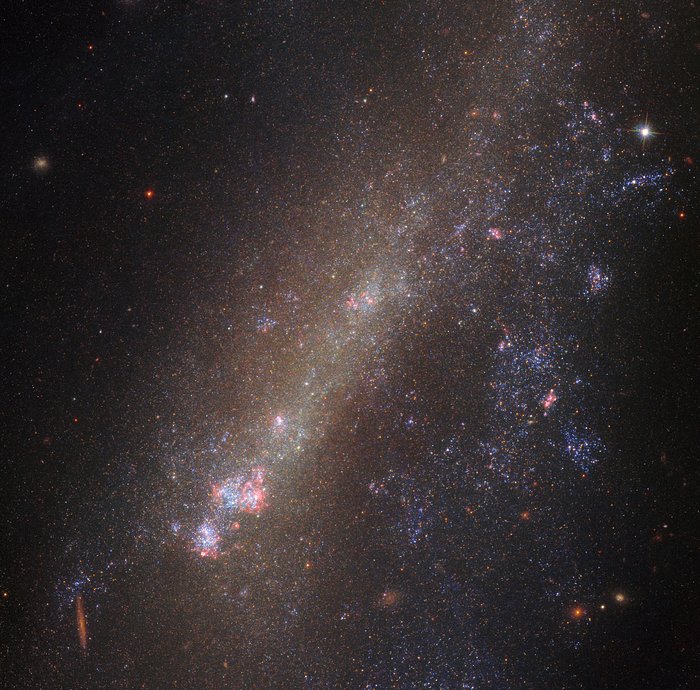 Gravity governs the movements of the cosmos. It draws flocks of galaxies together to form small groups and more massive galaxy clusters, and brings duos so close that they begin to tug at one another. This latter scenario can have extreme consequences, with members of interacting pairs of galaxies often being dramatically distorted, torn apart, or driven to smash into one another, abandoning their former identities and merging to form a single accumulation of gas, dust, and stars.

The subject of this NASA/ESA Hubble Space Telescope image, IC 1727, is currently interacting with its near neighbour, NGC 672 (which is just out of frame). The pair’s interactions have triggered peculiar and intriguing phenomena within both objects — most noticeably in IC 1727. The galaxy’s structure is visibly twisted and asymmetric, and its bright nucleus has been dragged off-centre.

In interacting galaxies such as these, astronomers often see signs of intense star formation (in episodic flurries known as starbursts) and spot newly-formed star clusters. They are thought to be caused by gravity churning, redistributing, and compacting the gas and dust. In fact, astronomers have analysed the star formation within IC 1727 and NGC 672 and discovered something interesting — observations show that simultaneous bursts of star formation occurred in both galaxies some 20 to 30 and 450 to 750 million years ago. The most likely explanation for this is that the galaxies are indeed an interacting pair, approaching each other every so often and swirling up gas and dust as they pass close by.