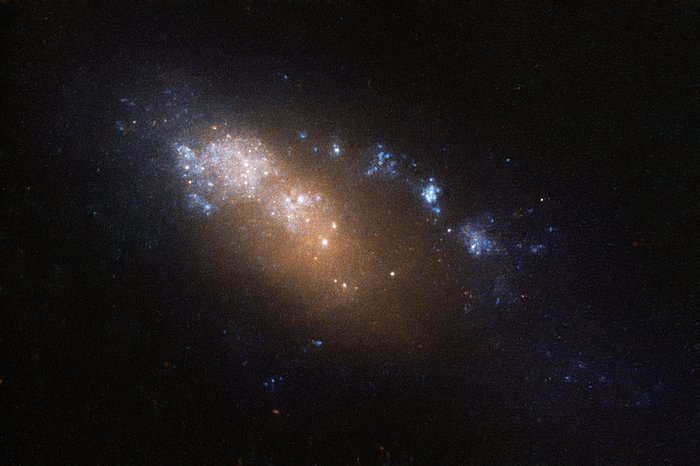 NGC 178 may be small, but it packs quite a punch. Measuring around 40 000 light-years across, its diameter is less than half that of the Milky Way, and it is accordingly classified as a dwarf galaxy. Despite its diminutive size, NGC 178 is busy forming new stars. On average, the galaxy forms stars totalling around half the mass of the Sun per year — enough to label it a starburst galaxy.

The galaxy’s discovery is an interesting, and somewhat confusing, story. It was originally discovered by American astronomer Ormond Stone in 1885 and dubbed NGC 178, but its position in the sky was recorded incorrectly — by accident the value for the galaxy’s right ascension (which can be thought of as the celestial equivalent of terrestrial longitude) was off by a considerable amount.

In the years that followed NGC 178 was spotted again, this time by French astronomer Stéphane Javelle. As no catalogued object occupied that position in the sky, Javelle believed he had discovered a new galaxy and entered it into the expanded Index Catalogue under the name IC 39. Later, American astronomer Herbert Howe also observed the object and corrected Stone’s initial mistake. Many years later, astronomers finally noticed that NGC 178 and IC 39 were actually the same object!

This image of NGC 178 comprises data gathered by the Wide Field Planetary Camera 2 aboard the NASA/ESA Hubble Space Telescope.