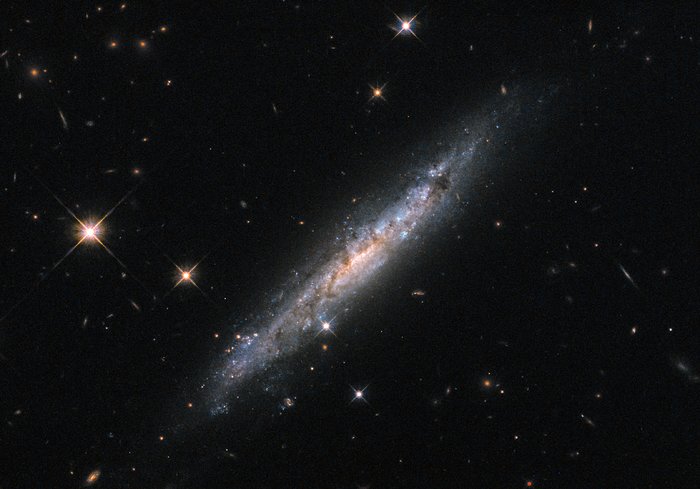 Don’t be fooled! The subject of this Picture of the Week, ESO 580-49, may seem tranquil and unassuming, but this spiral galaxy actually displays some explosive tendencies.

In October of 2011, a cataclysmic burst of high-energy gamma-ray radiation — known as a gamma-ray burst, or GRB — was detected coming from the region of sky containing ESO 580-49. Astronomers believe that the galaxy was the host of the GRB, given that the chance of a coincidental alignment between the two is roughly 1 in 10 million. At a distance of around 185 million light-years from Earth, it was the second-closest gamma-ray burst (GRB) ever detected.

Gamma-ray bursts are among the brightest events in the cosmos, occasionally outshining the combined gamma-ray output of the entire observable Universe for a few seconds. The exact cause of the GRB that probably occurred within this galaxy, catalogued as GRB 111005A, remains a mystery. Several events are known to lead to GRBs, but none of these explanations appear to fit the bill in this case. Astronomers have therefore suggested that ESO 580-49 hosted a new type of GRB explosion — one that has not yet been characterised.