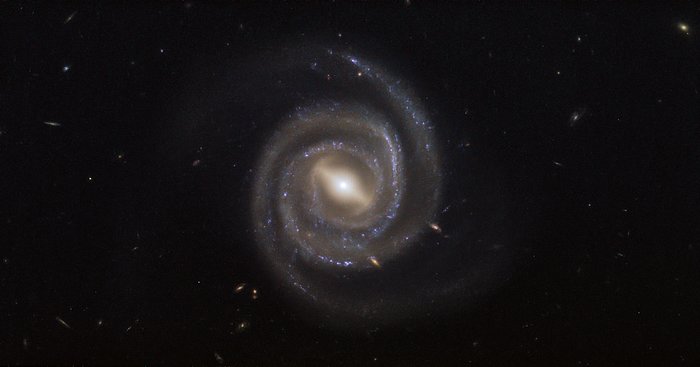 This image, captured by the NASA/ESA Hubble Space Telescope’s Wide Field Camera 3 (WFC3), shows a galaxy named UGC 6093. As can be easily seen, UGC 6093 is something known as a barred spiral galaxy — it has beautiful arms that swirl outwards from a bar slicing through the galaxy’s centre. It is classified as an active galaxy, which means that it hosts an active galactic nucleus, or AGN: a compact region at a galaxy’s centre within which material is dragged towards a supermassive black hole. As this black hole devours the surrounding matter it emits intense radiation, causing it to shine brightly.

But UGC 6093 is more exotic still. The galaxy essentially acts as a giant astronomical laser that spews out light at microwave, not visible, wavelengths — this type of object is dubbed a megamaser (maser being the term for a microwave laser). Megamasers such as UGC 6093 can be some 100 million times brighter than masers found in galaxies like the Milky Way.

Hubble’s WFC3 observes light spanning a range wavelengths — from the near-infrared, through the visible range, to the near-ultraviolet. It has two channels that detect and process different light, allowing astronomers to study a remarkable range of astrophysical phenomena; for example, the UV-visible channel can study galaxies undergoing massive star formation, while the near-infrared channel can study redshifted light from galaxies in the distant Universe. Such multi-band imaging makes Hubble invaluable in studying megamaser galaxies, as it is able to untangle their intriguing complexity.