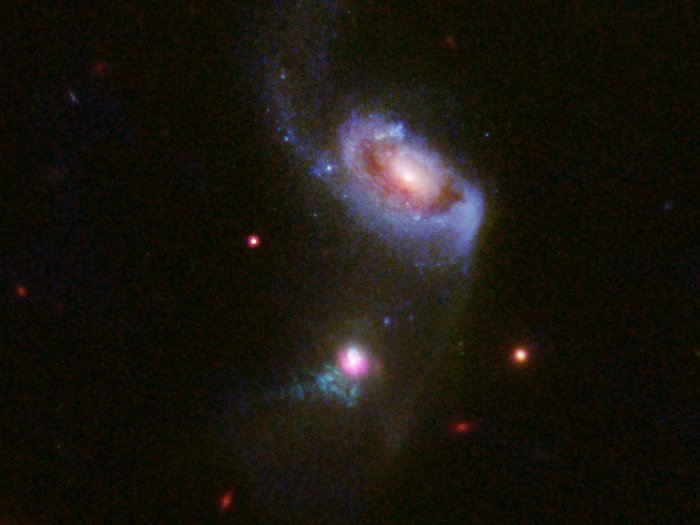 Researchers using a suite of telescopes including the NASA/ESA Hubble Space Telescope have spotted a supermassive black hole blowing huge bubbles of hot, bright gas — one bubble is currently expanding outwards from the black hole, while another older bubble slowly fades away. This cosmic behemoth sits within the galaxy at the bottom of this image, which lies 900 million light-years from Earth and is known as SDSS J1354+1327. The upper, larger, galaxy is known as SDSS J1354+1328.

Supermassive which can have a mass equivalent to billions of suns, are found in the centre of most galaxies (including the Milky Way). These black holes are able to “feed” on their surroundings, causing them to shine brilliantly as Active Galactic Nuclei (AGN). However, this feeding process is not continuous as it depends on how much matter is available for the black hole to consume; if the surrounding material is clumpy and irregular, an AGN can be seen turning “off” and “on”, and flickering over long cosmic timescales.

This clumpy accretion is what scientists believe has happened with the black hole in SDSS J1354+1327. Scientists believe these two outflows of material are the result of the black hole burping out material after two different feeding events. The first outburst created the fading southern relic: a cone of gas measuring 33 000 light-years across. Around 100 000 years later, a second burst spawned the more compact and radiant outflow emanating from the top of the galaxy: a cone of shocked gas some 3300 light-years across.