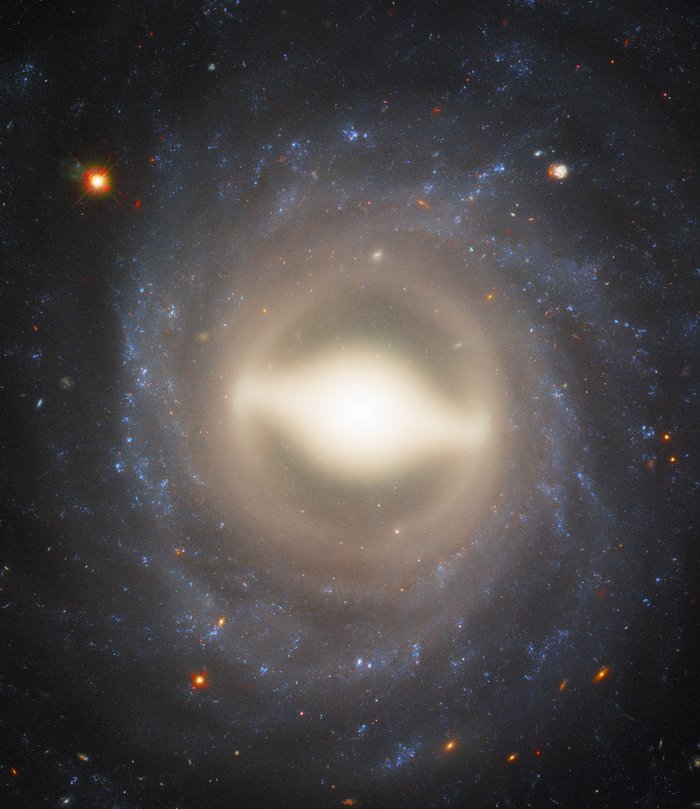 This stunning image from Hubble shows the majestic galaxy NGC 1015, found nestled within the constellation of Cetus (The Whale) 118 million light-years from Earth. In this image, we see NGC 1015 face-on, with its beautifully symmetrical swirling arms and bright central bulge creating a scene akin to a sparkling Catherine wheel firework.

NGC 1015 has a bright, fairly large centre and smooth, tightly wound spiral arms and a central “bar” of gas and stars. This shape leads NGC 1015 to be classified as a barred spiral galaxy — just like our home, the Milky Way. Bars are found in around two-thirds of all spiral galaxies, and the arms of this galaxy swirl outwards from a pale yellow ring encircling the bar itself. Scientists believe that any hungry black holes lurking at the centre of barred spirals funnel gas and energy from the outer arms into the core via these glowing bars, feeding the black hole, fueling star birth at the centre and building up the galaxy’s central bulge.

In 2009, a Type Ia supernova named SN 2009ig was spotted in NGC 1015 — one of the bright dots to the upper right of the galaxy’s centre. These types of supernovae are extremely important: they are all caused by exploding white dwarfs which have companion stars, and always peak at the same brightness — 5 billion times brighter than the Sun. Knowing the true brightness of these events, and comparing this with their apparent brightness, gives astronomers a unique chance to measure distances in the Universe.