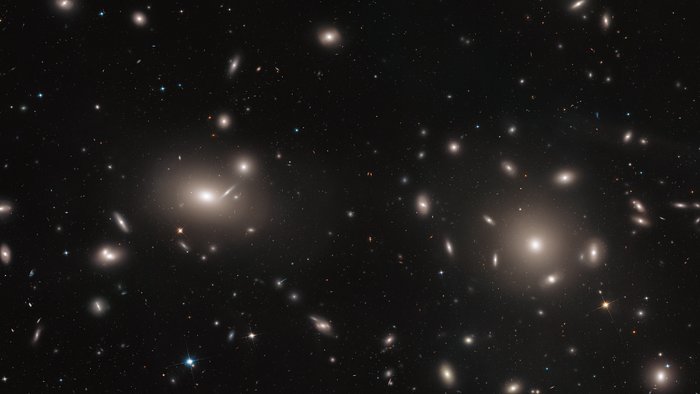 This image, from the NASA/ESA Hubble Space Telescope’s Advanced Camera for Surveys (ACS), reveals thousands of globular clusters lying at the core of a galaxy cluster. It was created by a Hubble survey that drew on data from three of the telescope’s separate observing programmes to explore the centre of the Coma cluster, a huge gathering of over 1000 galaxies, about 320 million light-years away, all bound together by gravity.

While globular clusters orbiting our Milky Way reveal themselves as sparkling spherical assemblies of densely packed stars, at the distance of the Comla cluster, they only appear as tiny dots of light, even to Hubble's advanced vision. However, a characteristic feature of globular clusters is their colour; since the stars in any given cluster all formed at around the same time and from the same “stuff”, they usually have a consistent colour. In this way, the astronomers were able to identify the clusters — and rule out background galaxies lying in the same region of sky — by analysing their colour and size, painting a beautiful family portrait of Coma and its clusters.

With the help of the identified globular clusters astronomers can map the distribution of matter and — even more important — of dark matter in the Coma cluster. The Coma Cluster was one of the first places where observed gravitational anomalies indicated the existence of dark matter.