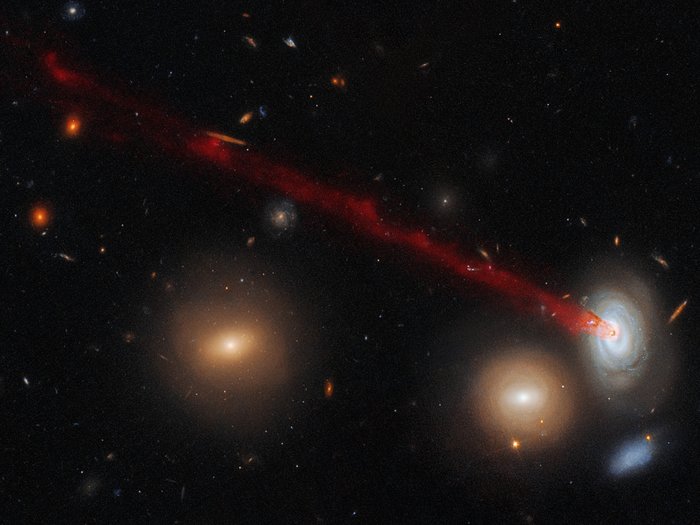 This striking image combines data gathered with the Advanced Camera for Surveys, installed on the NASA/ESA Hubble Space Telescope and data from the Subaru Telescope in Hawaii. It shows just a part of the spectacular tail emerging from a spiral galaxy nicknamed D100.

Tails such as these are created by a process known as ram-pressure stripping. Despite appearances, the space between galaxies in a cluster is far from empty; it is actually filled with superheated gas and plasma, which drags and pulls at galaxies as they move through it, a little like the resistance one experiences when wading through deep water. This can be strong enough to tear galaxies apart, and often results in objects with peculiar, bizarre shapes and features — as seen here.

D100’s eye-catching tail of gas, which stretches far beyond this image to the left, is a particularly striking example of this phenomenon. The galaxy is a member of the huge Coma cluster. The pressure from the cluster’s hot constituent plasma (known as the intracluster medium) has stripped gas from D100 and torn it away from the galaxy’s main body, and drawing it out into the plume pictured here.

Densely populated clusters such as Coma are home to thousands of galaxies. They are thus the perfect laboratories in which to study the intriguing phenomenon of ram-pressure stripping, which, as well as producing beautiful images such as this, can have a profound effect on how galaxies evolve and form new generations of stars.