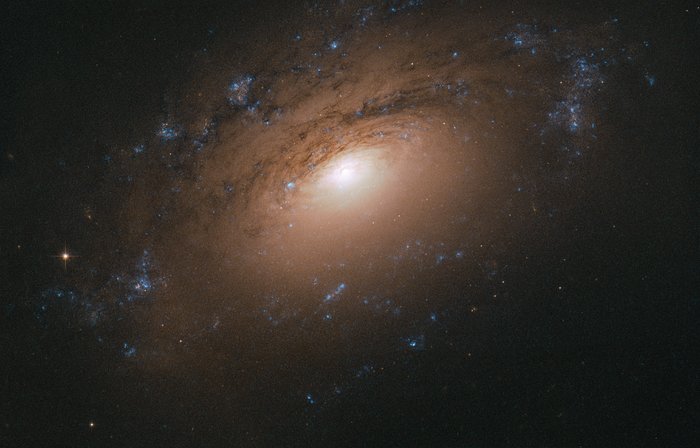 Every now and then, the NASA/ESA Hubble Space Telescope glimpses a common object — say, a spiral galaxy — in an interesting or unusual way. A sharply angled perspective, such as the one shown in this Picture of the Week, can make it seem as if we, the viewers, are craning our necks to see over a barrier into the galaxy's bright centre.

In the case of NGC 3169, this barrier is the thick dust embedded within the galaxy's spiral arms. Cosmic dust comprises a potpourri of particles, including water ice, hydrocarbons, silicates, and other solid material. It has many origins and sources, from the leftovers of star and planet formation to molecules modified over millions of years by interactions with starlight.

NGC 3169 is located about 70 million light-years away in the constellation of Sextans (The Sextant). It is part of the Leo I Group of galaxies, which, like the Local Group that houses our home galaxy, the Milky Way, is part of a larger galactic congregation known as the Virgo Supercluster.