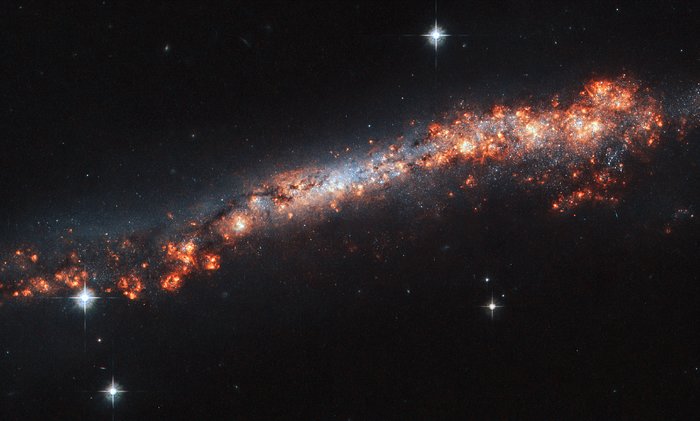 Believe it or not, this long, luminous streak, speckled with bright blisters and pockets of material, is a spiral galaxy like our Milky Way. But how could that be?

It turns out that we see this galaxy, named NGC 3432, orientated directly edge-on to us from our vantage point here on Earth. The galaxy’s spiral arms and bright core are hidden, and we instead see the thin strip of its very outer reaches. Dark bands of cosmic dust, patches of varying brightness, and pink regions of star formation help with making out the true shape of NGC 3432 — but it’s still somewhat of a challenge! Because observatories such as the NASA/ESA Hubble Space Telescope have seen spiral galaxies at every kind of orientation, astronomers can tell when we happen to have caught one from the side.

The galaxy is located in the constellation of Leo Minor (The Lesser Lion). Other telescopes that have had NGC 3432 in their sights include those of the Sloan Digital Sky Survey, the Galaxy Evolution Explorer (GALEX), and the Infrared Astronomical Satellite (IRAS).