Eye of the Serpent 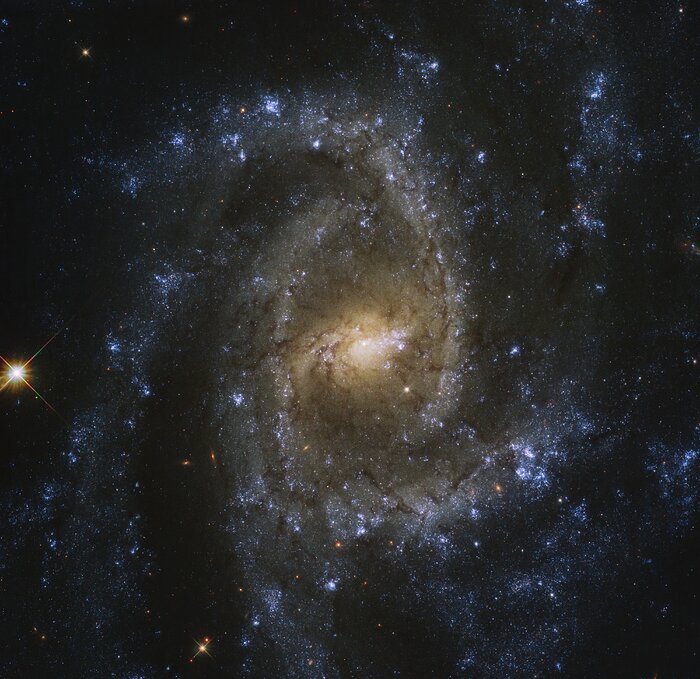 The twisting patterns created by the multiple spiral arms of NGC 2835 create the illusion of an eye. This is a fitting description, as this magnificent galaxy resides near the head of the southern constellation of Hydra, the water snake. This stunning barred spiral galaxy, with a width of just over half that of the Milky Way, is brilliantly featured in this image taken by the NASA/ESA Hubble Space Telescope. Although it cannot be seen in this image, a supermassive black hole with a mass millions of times that of our Sun is known to nestle in the very centre of NGC 2835 .

This galaxy was imaged as part of PHANGS-HST, a large galaxy survey with Hubble that aims to study the connections between cold gas and young stars in a variety of galaxies in the local Universe. Within NGC 2835, this cold, dense gas produces large numbers of young stars within large star formation regions. The bright blue areas, commonly observed in the outer spiral arms of many galaxies, show where near-ultraviolet light is being emitted more strongly , indicating recent or ongoing star formation.

Expected to image over 100 000 gas clouds and star-forming regions outside our Milky Way, this survey hopes to uncover and clarify many of the links between cold gas clouds, star formation and the overall shape and morphology of galaxies. This initiative is a collaboration with the international Atacama Large Millimeter/submillimeter Array (ALMA) and the European Southern Observatory's Very Large Telescope's MUSE instrument, through the greater PHANGS program (PI: E. Schinnerer).