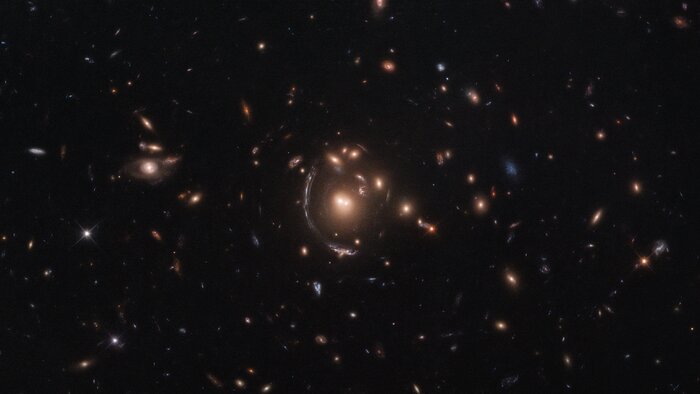 This NASA/ESA Hubble Space Telescope image features the galaxy LRG-3-817, also known as SDSS J090122.37+181432.3. The galaxy, its image distorted by the effects of gravitational lensing, appears as a long arc to the left of the central galaxy cluster.

Gravitational lensing occurs when a large distribution of matter, such as a galaxy cluster, sits between Earth and a distant light source. As space is warped by massive objects, the light from the distant object bends as it travels to us and we see a distorted image of it. This effect was first predicted by Einstein’s general theory of relativity.

Strong gravitational lenses provide an opportunity for studying properties of distant galaxies, since Hubble can resolve details within the multiple arcs that are one of the main results of gravitational lensing. An important consequence of lensing distortion is magnification, allowing us to observe objects that would otherwise be too far away and too faint to be seen. Hubble makes use of this magnification effect to study objects beyond the sensitivity of its 2.4-metre-diameter primary mirror, showing us the most distant galaxies humanity has ever encountered.

This lensed galaxy was found as part of the Sloan Bright Arcs Survey, which discovered some of the brightest gravitationally lensed high-redshift galaxies in the night sky.