In the Sky with Diamonds 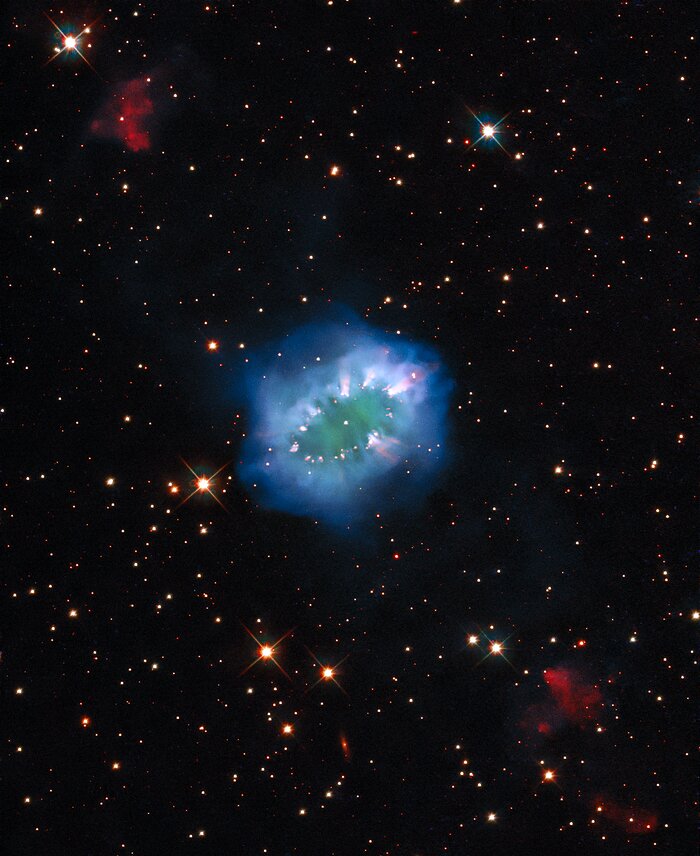 The interaction of two doomed stars has created this spectacular ring adorned with bright clumps of gas — a diamond necklace of cosmic proportions. Fittingly known as the Necklace Nebula, this planetary nebula is located 15 000 light-years away from Earth in the small, dim constellation of Sagitta (The Arrow).

The Necklace Nebula — which also goes by the less glamorous name of PN G054.2-03.4 — was produced by a pair of tightly orbiting Sun-like stars. Roughly 10 000 years ago, one of the aging stars expanded and engulfed its smaller companion, creating something astronomers call a “common envelope”. The smaller star continued to orbit inside its larger companion, increasing the bloated giant’s rotation rate until large parts of it spun outwards into space. This escaping ring of debris formed the Necklace Nebula, with particularly dense clumps of gas forming the bright “diamonds” around the ring.

The pair of stars which created the Necklace Nebula remain so close together — separated by only a few million kilometres — that they appear as a single bright dot in the centre of this image. Despite their close encounter the stars are still furiously whirling around each other, completing an orbit in just over a day.

The Necklace Nebula was featured in a previously released Hubble image, but now this new image has been created by applying advanced processing techniques, making for a new and improved view of this intriguing object. The composite image includes several exposures from Hubble’s Wide Field Camera 3.