A Scattering of Stars 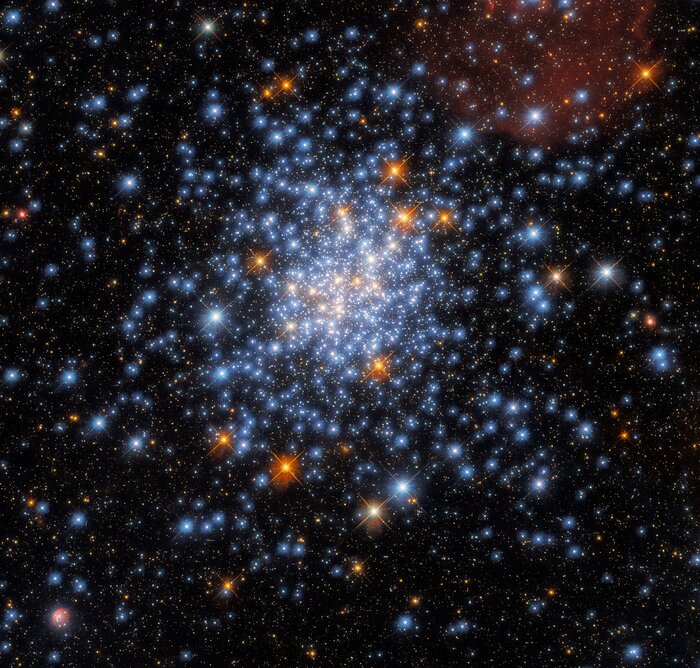 This Picture of the Week depicts the open star cluster NGC 330, which lies around 180,000 light-years away inside the Small Magellanic Cloud. The cluster — which is in the constellation Tucana (The Toucan) — contains a multitude of stars, many of which are scattered across this striking image.

The most stunning object in this image is actually the very small star cluster in the lower left corner of the image, surrounded by a nebula of ionised hydrogen (red) and dust (blue). Named GALFOR 1, the cluster was discovered in 2018 in Hubble's archival data, which was used to create this latest image from Hubble. To better understand this star cluster, specifically whether the nebula surrounding the cluster also contains a bow shock, scientists will need high resolution infrared imagery from the upcoming NASA/ESA/CSA James Webb Space Telescope.

This image also contains clues about the inner workings of Hubble itself. The criss-cross patterns surrounding the stars in this image — known as diffraction spikes —  were created when starlight interacted with the four thin vanes supporting Hubble’s secondary mirror.

As star clusters form from a single primordial cloud of gas and dust, all the stars they contain are roughly the same age. This makes them useful natural laboratories for astronomers to learn how stars form and evolve. This image uses observations from Hubble’s Wide Field Camera 3, and incorporates data from two very different astronomical investigations. The first aimed to understand why stars in star clusters appear to evolve differently from stars elsewhere, a peculiarity first observed by the Hubble Space Telescope. The second aimed to determine how large stars can be before they become doomed to end their lives in cataclysmic supernova explosions.