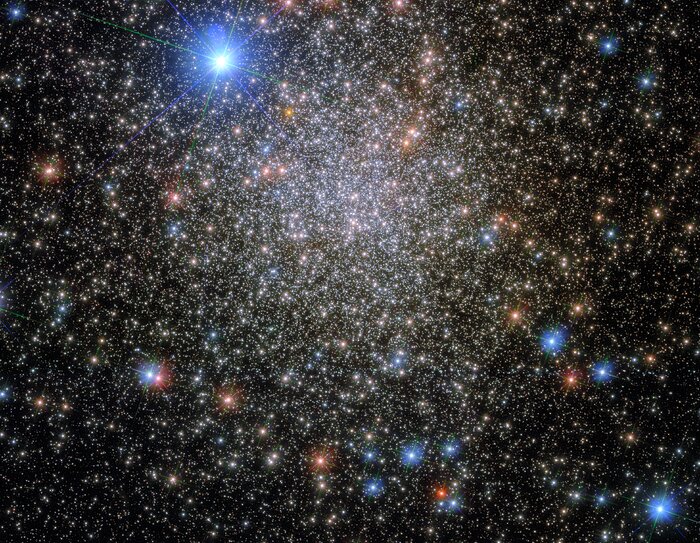 This image shows the globular cluster NGC 6380, which lies around 35 000 light-years from Earth, in the constellation Scorpio (The Scorpion). The very bright star at the top of the image is HD 159073, which is only around 4000 light-years from Earth, making it a much nearer neighbour to Earth than NGC 6380. This image was taken with Hubble’s Wide Field Camera 3 (WFC3), which, as its name suggests, has a wide field of view, meaning that it can image relatively large areas of the sky in enormous detail.

NGC 6380 is not a particularly exciting name, but it indicates that this cluster is catalogued in the New General Catalogue (NGC), which was originally compiled in 1888. This cluster has, however, been known by many other names. It was originally discovered by James Dunlop in 1826, and he rather immodestly named it Dun 538. Eight years later, in 1834, it was independently rediscovered by John Herschel and he (similarly immodestly) went on to name it H 3688. The cluster was re-rediscovered in 1959 in Paris by Pişmiş, who catalogued it as Tonantzintla 1 — and who, to continue the pattern, also referred to it as Pişmiş 25. In addition to its colourful history of rediscovery, up until the 1950s NGC 6380 was thought to be an open cluster. It was A. D. Thackeray who realised that it was in fact a globular cluster. Nowadays, this cluster is reliably recognised in widely available catalogues as a globular cluster, and referred to simply as NGC 6380.