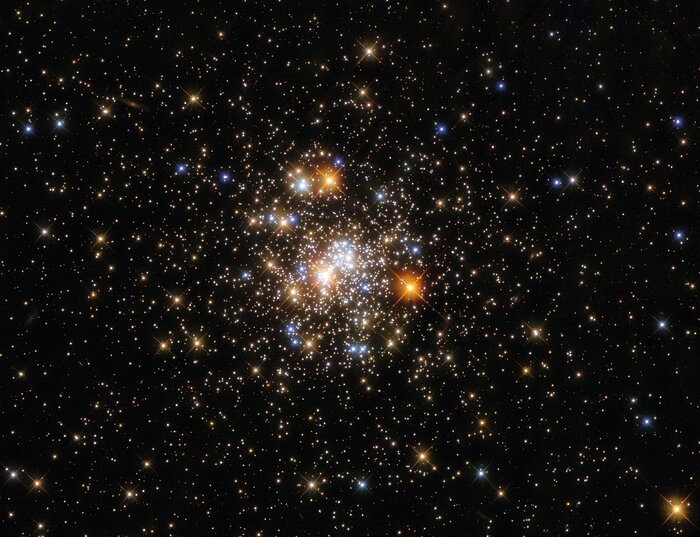 This star-studded image from the NASA/ESA Hubble Space Telescope depicts NGC 6717, which lies more than 20 000 light-years from Earth in the constellation Sagittarius. NGC 6717 is a globular cluster, a roughly spherical collection of stars tightly bound together by gravity. Globular clusters contain more stars in their centres than their outer fringes, as this image aptly demonstrates; the sparsely populated edges of NGC 6717 are in stark contrast to the sparkling collection of stars at its centre.

The centre of the image also contains some interlopers from closer to home. Bright foreground stars close to Earth are surrounded by criss-cross diffraction spikes formed by starlight interacting with the structures supporting Hubble’s secondary mirror.

The area of the night sky which contains the constellation Sagittarius also contains the centre of the Milky Way, which is filled with light-absorbing gas and dust. This absorption of light — which astronomers refer to as extinction — makes studying globular clusters near the Galactic centre a challenging endeavour. To determine the properties of NGC 6717, astronomers relied on a combination of Hubble’s Wide Field Camera 3 and the Advanced Camera for Surveys.

ESA/Hubble and NASA, A. Sarajedini