A Sprinkling of Stars 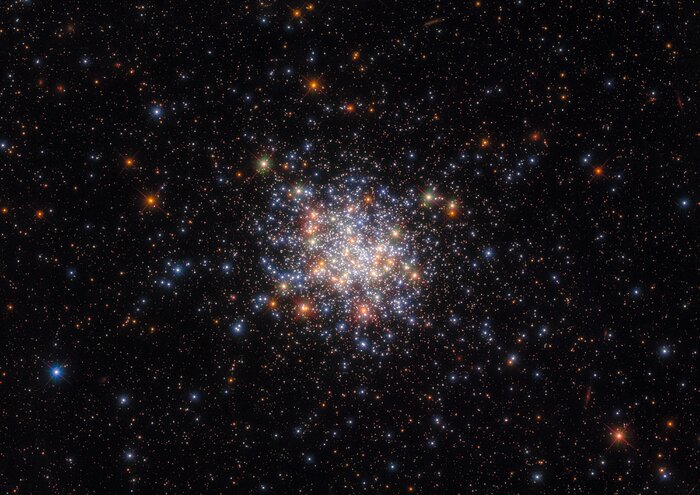 The open star cluster NGC 1755 resembles a pinch of salt strewn on a jet-black tablecloth in this image from the NASA/ESA Hubble Space Telescope. This collection of stars resides in one the Milky Way’s near neighbours — the Large Magellanic Cloud — and measures 120 light-years from side to side. Despite this impressive breadth, NGC 1755 is a member of the smaller class of star clusters. Star clusters are gravitationally bound collections of stars, and come in two main varieties — smaller open clusters like NGC 1755, which are hosts to younger stars, and gargantuan globular clusters, which can contain millions of older stars.

Hubble gazed into the heart of NGC 1755 in order to better understand how different populations of stars can co-exist in a single cluster. A population of stars is a group of stars with similar properties such as age or chemical composition, and these populations provide astronomers with valuable insights into the births, lives, and deaths of stars. Clusters in the Magellanic Clouds are particularly useful natural laboratories thanks to the Clouds’ proximity to the Milky Way. Hubbles’s eagle-eyed vision was a vital asset when observing NGC 1755 — with so many stars packed into a small area of sky, Hubble’s high-resolution Advanced Camera for Surveys and Wide Field Camera 3 allowed individual stars in the cluster to be distinguished.