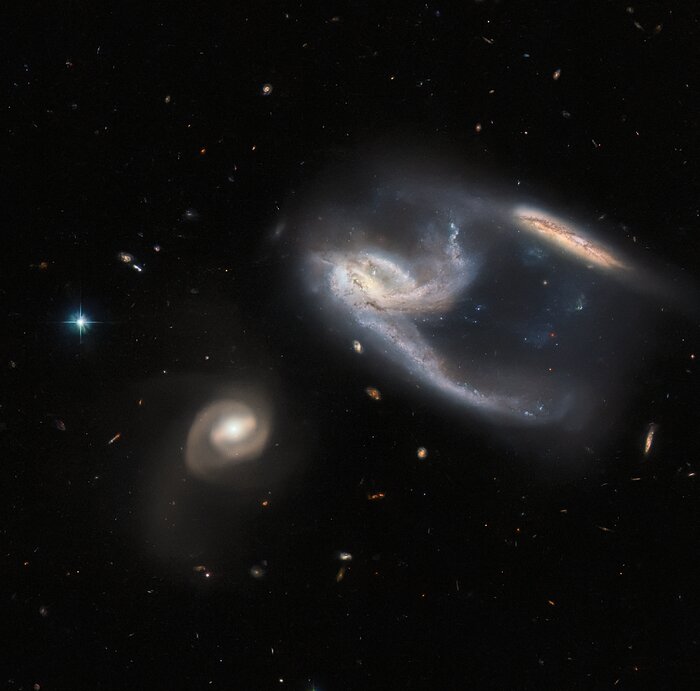 The subject of this image is a group of three galaxies, collectively known as NGC 7764A. They were imaged by the NASA/ESA Hubble Space Telescope, using both its Advanced Camera for Surveys (ACS) and Wide Field Camera 3 (WFC3). The two galaxies in the upper right of the image appear to be interacting with one another — indeed, the long trails of stars and gas extending from them both give the impression that they have both just been struck at great speed, thrown into disarray by the bowling-ball-shaped galaxy to the lower left of the image. In reality, however, interactions between galaxies happen over very long time periods, and galaxies rarely collide head-on with one another. It is also unclear whether the galaxy to the lower left is actually interacting with the other two, although they are so relatively close in space that it seems possible that they are. By happy coincidence, the collective interaction between these galaxies have caused the two on the upper right to form a shape, which from our Solar System's perspective, ressembles the starship known as the USS Enterprise from Star Trek!

NGC 7764A, which lies about 425 million light years from Earth in the constellation Phoenix, is a fascinating example of just how awkward astronomical nomenclature can be. The three galaxies are individually referred to as NGC 7764A1, NGC 7764A2 and NGC 7764A3, and just to be really difficult, an entirely separate galaxy, named NGC 7764, sits in the skies about a Moon’s distance (as seen from Earth) away. This rather haphazard naming makes more sense when we consider that many of the catalogues for keeping track of celestial bodies were compiled well over 100 years ago, long before modern technology made standardising scientific terminology much easier. As it is, many astronomical objects have several different names, or might have names that are so similar to other objects’ names that they cause confusion.