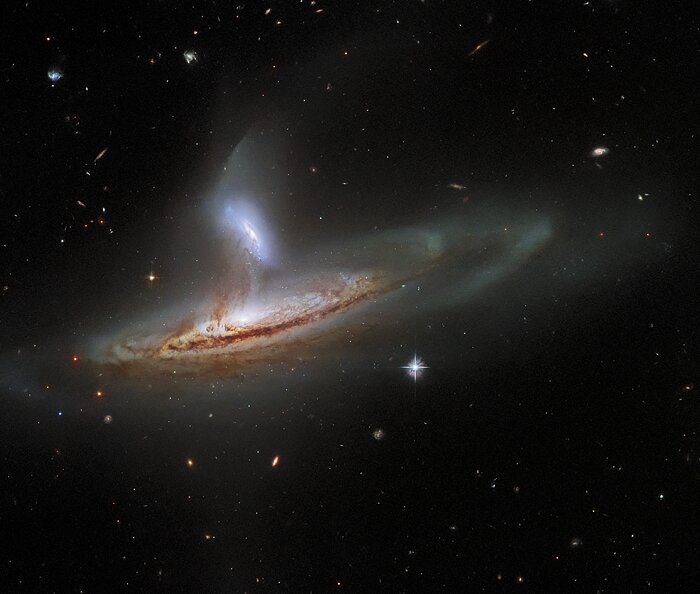 It is now widely accepted amongst astronomers that an important aspect of how galaxies evolve is the way they interact with one another. Galaxies can merge, collide, or brush past one another — each of which has a significant impact on their shapes and structures. As common as these interactions are thought to be in the Universe, it is rare to capture an image of two galaxies interacting in such a visibly dynamic way. This image, from the NASA/ESA Hubble Space Telescope, feels incredibly three-dimensional for a piece of deep-space imagery.

The subject of this image is named Arp 282, an interacting galaxy pair that is composed of the Seyfert galaxy NGC 169 (bottom) and the galaxy IC 1559 (top). If you’re interested in learning more about Seyfert galaxies, you can read about the Seyfert galaxy NGC 5728 here. Interestingly, both of the galaxies comprising Arp 282 have monumentally energetic cores, known as active galactic nuclei (AGN), although it is difficult to tell that from this image. This is actually rather fortunate, because if the full emission of two AGNs was visible in this image, then it would probably obscure the beautifully detailed tidal interactions occurring between NGC 169 and IC 1559. Tidal forces occur when an object’s gravity causes another object to distort or stretch. The direction of the tidal forces will be away from the lower-mass object and towards the higher mass object. When two galaxies interact, gas, dust and even entire solar systems will be drawn away from one galaxy towards the other by these tidal forces. This process can actually be seen in action in this image — delicate streams of matter have formed, visibly linking the two galaxies.