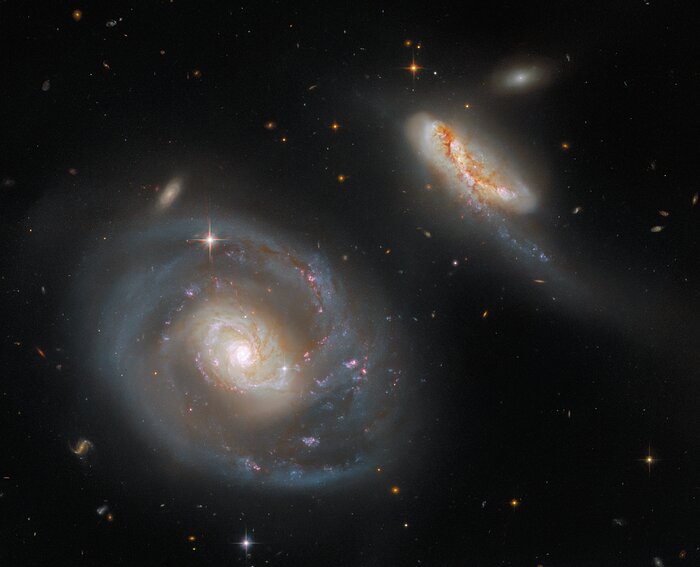 This striking image from the NASA/ESA Hubble Space Telescope showcases Arp 298, a stunning pair of interacting galaxies. Arp 298 — which comprises the two galaxies NGC 7469 and IC 5283 — lies roughly 200 million light-years from Earth in the constellation Pegasus. The larger of the two galaxies pictured here is the barred spiral galaxy NGC 7469, and IC 5283 is its diminutive companion. NGC 7469 is also host to an active, supermassive black hole and a bright ring of star clusters.

The “Arp” in this galaxy pair’s name signifies that they are listed in the Atlas of Peculiar Galaxies compiled by the astronomer Halton Arp. The Atlas of Peculiar Galaxies is a rogues’ gallery of weird and wonderful galaxies containing peculiar structures, featuring galaxies exhibiting everything from segmented spiral arms to concentric rings. This interacting galaxy pair is a familiar sight for Hubble — a portrait of the merging galaxies in Arp 298 was published in 2008.

This image of Arp 298 contains data from three separate Hubble proposals. By combining observations from three proposals, Arp 298 is captured in glorious detail in seven different filters from two of Hubble’s instruments — the Wide Field Camera 3 and the Advanced Camera for Surveys.

The process of planning Hubble observations starts with a proposal — a detailed plan of what an astronomer intends to observe and their scientific motivation for doing so. Once a year, these proposals are gathered and judged in a gruelling review process which assess their scientific merit and feasibility. Fewer than 20% of the proposed observations in any given year will make it through this process and be approved, which makes observing time with Hubble highly prized indeed.

This system will be one of the first galaxies observed with the NASA/ESA/CSA James Webb Space Telescope as part of the Director's Discretionary Early Release Science Programs in Summer 2022.